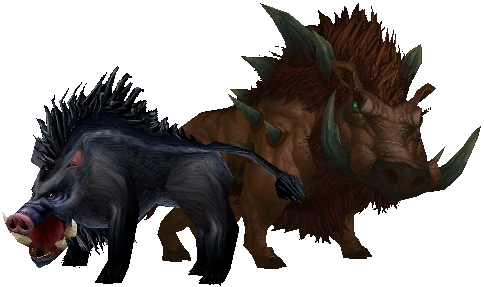 Boars (aka wild boars)[1] are a common, usually furry, cloven-hoofed, four-legged beast that is the wild ancestor of the domesticated pig. Most boars are neutral when approached and are generally omnivorous. They start at around large dog-sized and get larger from there. Some boars are minions of the quilboars and are revered within quilboar culture, and particularly large and tenacious ones are seen as a favor from Agamaggan.[2] Boar meat is the staple diet of the orcs.[3]

In Blasted Lands, there were two types of boars - the ash-mane and the helboar.[4]

Boars can be two feet high and two feet wide.[5]

Boars that can attack with quills are known as quilbeasts.

Boars were critters in Warcraft II.

There are three types of armored boar that dwell in Razorfen Kraul and into other places ; despite appearances, they are tamable by hunters.

There are also a undead variety of boars, which sometimes, despite their unconventional appearance, can be tamed.

A new model of boars was introduced with the Warlords of Draenor expansion. These appear to be the predecessors of the helboars seen in Outland.

The great greytusks shed their tusks once a year and are extremely shy until they grow back.[10] Rocktusk battleboars attract mates with their distinctive manes, which resemble mohawks.[11]

Frostboars subsist on a diet almost entirely of frozen berries, though they find slow off-worlders equally tasty.[12] As part of the rite of passage into adulthood, a Frostwolf orc must slay a frostboar and carve their family genealogy as far back as will fit on the creature's largest tusk. Family history and tradition are of great importance to the Frostwolf clan, so the largest frostboars are hunted each season to preserve clan lineage.[13]

Boars are a family of Tenacity pets and are tamable by hunters starting at level 10. Orc hunters start with a Young Boar at level 1. Boars, through use of their

[Gore] ability, can cause the target to take 30% additional damage from bleed effects for 15 seconds. This makes them a fair choice in raids when player-provided debuffs such as

[Hemorrhage] effect is not available. A Marksman hunter with

[Piercing Shots] can also use a boar pet to boost their own damage.

There are fourteen different skins available for boar pets. Most unique of mention are the demonic helboars which feature huge spikes, horns and bright coloring. Players have always been fond of the armored boars found in Razorfen Kraul, as well. Undead hunters may also prefer the ghastly, eyeless

Boars were one of the very few pets easy to feed, a feature that appealed to many hunters. The only other pets capable of eating all types of foods are the bears, dogs, and goats.

Though not carnivores, these wild swine are bad tempered; they usually charge anyone who disturbs them. A boar is covered in coarse, grayish-black fur. Adult males are about 4 feet long and 3 feet high at the shoulder. A boar is such a tenacious combatant that it continues to fight without penalty even while disabled or dying.[14]