Use the Cenarion Moondust on the Moonkin Stone of Auberdine to bring forth Lunaclaw. From there, you must face Lunaclaw and earn the strength of body and heart it possesses.

Speak with Mathrengyl Bearwalker in Darnassus when you are done.

Directly east of Auberdine lay many moonkin caves. The one closest to Auberdine has a Moonkin Stone inside it. Lunaclaw, the defender of the stone, will face you only when Cenarion Moondust is applied to it. Lunaclaw possesses within it a strength that you must use as one of the Claw.

You will learn the following abilities:

You have finally taken your large step into a much larger world, <name>.  I sense the teaching of the Great Bear Spirit within you, and I sense that you have received the strength that Lunaclaw possessed.

There are no further obstacles in your way... let me now teach you what it means to be a Druid of the Claw!

The Moonkin Stone is located in a cave in Darkshore east of Auberdine (coordinates [43, 45] 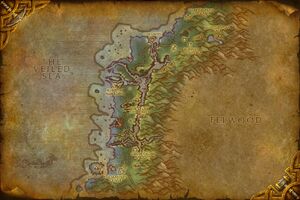 ). There are some moonkin near the cave, you probably need to kill one or some of them in order to reach the stone safely, take care of not fighting too many at once. Note that

[Entangling Roots] will only work outside and not if you are standing inside the cave. Since there are other quests in this location, you could get a group for the fight.

To defeat Lunaclaw, buff yourself with

[Mark of the Wild] and

[Thorns] before you activate the stone. When he runs towards you, stop him with

[Entangling Roots] (go outside the cave for that) before he comes close, then hit him with

[Moonfire]. When you run out of mana, fight him in melee for a while or root him and run away until you have mana for spells again.

When Lunaclaw is dead, talk to the Spirit of Lunaclaw.

If you lose the fight, you need to travel back to Darnassus to get another sample of Cenarion Lunadust.

The slain spirit of Lunaclaw stares at you intently, as though wanting something from you.

The spirit looks intently into your eyes and grasps your hand. You feel a warmth shoot through your body, almost knocking you to your knees.

As the warmth passes, you feel the slight presence of an ursine spirit within your being... bolstering your resolve.