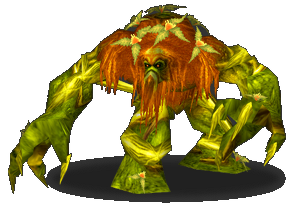 Often living in water, bog beasts may be hard to spot.

Bog beasts are large plant creatures often found in temperate marshes of Azeroth. They look like swamp monsters. Unlike animals, they reproduce by seeds. You can find bog beasts and similar type creatures in Teldrassil (timberlings and swampwalkers), Swamp of Sorrows (Mire Lords and Tangled Horrors), Wetlands (Fen Dwellers and Fen Creepers), Tanaris (Thistleshrubs), Dustwallow Marsh, Un'goro Crater (tar beasts) and Zangarmarsh (Marsh beasts and Fungal Monsters). Bog beasts may represent a type of conglomerate elemental of earth and water as suggested by the term "tar beast". Denalan, the botanist and quest giver NPC in Darnassus, notes that timberlings are connected to the land around them: "The Timberlings are elementals of nature. In some ways, they reflect the natural order of the plants and animals on our great tree."

A bog beast's roots, which grow on the outside of their bodies, are suitable for consumption.[1]

The fungus that also grows on them can be combined with the heart of a panther and the blood of a green dragon to make a truth serum,[2] while dew glands found within the bog beast can be used as a makeshift water sac.[3] 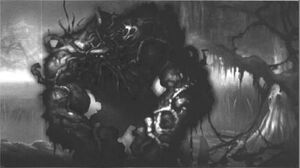 A bog beast from Manual of Monsters.

These massive plants might be mistaken for a thick clump of vegetation if not for its vaguely humanoid shape and surprising mobility. As the name suggests, bog beasts are massive, shambling monsters that are half plant and half beast. Not much is known about these secretive lords of the swamp except that they are territorial and quite aggressive. Explorers have recorded stories of their immense strength and resilience to harm. Bog beasts are known to wander the Dustwallow Marsh south of the Barrens. Bog beasts use their strength to slam into their enemies, crushing opponents' defenses with their fists and whatever large objects they can throw at them.[4][5]

Bog beasts are also found in the Swamp of Sorrows, Ashenvale, and Teldrassil.[6][7][8][9] These creatures are classified as elementals in the World of Warcraft. However in lore depending on type they vary between being elementals ("timberlings", "thistleshrubs", "tar beasts")[10][11][12] and/or ambulatory plants.[4][13] that being the case, the Warlock can use their

[Banish] spell on them. Something one may overlook because they do not look like the usual elementals or demons.

The plant creatures timberlings and thistleshrubs and the conglomerate elemental creatures tar beasts, while using the same model as bog beasts, are each considered separate types of creatures.[10] Bog beast still remains a broad categorization for the various varieties. 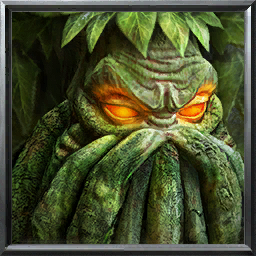