"It will be a constant struggle here in the Plaguelands until we have fully driven back the forces of the Alliance." —Emissary Gormok[1]

Agents of the Forsaken uncovered an Alliance plot to establish new bases here in the Eastern Plaguelands, at abandoned towers throughout the area.

It is imperative that we not allow them to establish a significant presence on our eastern borders, and so we must stave off this Alliance incursion. Our current plans are to drive them out of any towers they may have already seized, and occupy those that we have under our control against further attacks. 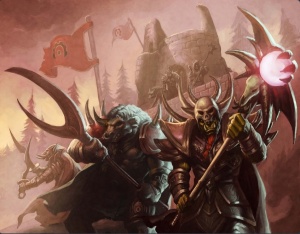 This is good news, <name>. It will be a constant struggle here in the Plaguelands until we have fully driven back the forces of the Alliance.

Until that day, I hope that we will have your continued assistance.

Bonus For The Factions

Each tower gives a 1% damage increase against undead to all members of the controlling faction in the Eastern Plaguelands. If one faction controls all four towers, then it gets a 5% damage increase increase.

When you control Northpass tower and click on the Shrine of Lordaeron you get a 5% health increase buff in Stratholme, Eastern Plaguelands and Scholomance.

When you capture the Eastwall Tower ghost guards appear and ride directly north to the Northpass Tower. They will help you take the tower over.

When you capture Crown Guard Tower your faction gains the use of the nearby graveyard.