Bombardiers are another form of sappers. The name is also used to designate soldiers having the responsibility to drop explosive weapons from a flying mount or vehicle, such as a bomber or a zeppelin. Sometimes the bombardier himself is able to fly, such in the case of the mantid. 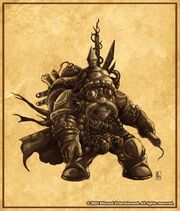 A bombardier is a hybrid class containing abilities of the tinker, sapper/demolitionist, and mortar teams. The bombardier is the highest practitioner of the art of things that go boom. Meticulous planners with a frenzied need to blow things up, most bombardiers are a haphazard mixture of forward-thinker and absent-minded tinker. A bombardier learns the fine art of goblin sapping. He is capable of sapping a wooden structure with explosives. Using tips from dwarven demolitionists and mortar teams, the bombardier learns to sap stone or metal. He is able to reduce the hardness of wood, stone, and metal structures for the purpose of blowing them up.

He can learn the art of making a bomb travel further with the ability to make the bombs bounce. It triples the range of the explosives the bombardier throws. Bombardiers are experts at assessing critical timing, especially when setting up explosive devices, nothing distracts them from setting a delay. An expert bombardier can precisely time grenades and other thrown or fired explosive device without delay, down to a specific initiative number in the initiative sequence. A master bombardier can apply his knowledge of architecture and engineering to position or aim the explosives to increase the damage of a placed and planned explosion.

Grenade throwing and bomb chucking are the bombardier's favorite sports. While the more clumsy bombardiers discover quickly that throwing well is crucial, talented grenade throwers usually find a way to put a spin on a toss for interesting effects. The bombardier can lob bombs ignoring low cover and targeting beyond it. Expert bombardiers can perfect a spiraling seeker toss. Using the bomb's own spin as a way to direct the explosive device, the bombardier can ignore any type of cover except for total cover.

As a bombardier perfects his skill with explosives, he can upgrade an explosives device. With upgrades, he can double the explosive force of bombs or grenades without increasing the size or weight of the device. An expert bombardier is capable of spending time upgrading an explosive device, and can maximize the construction of the bomb so that it always does the maximum amount of damage possible.

The master bombardier will sometimes remain close enough to an explosive to supervise a precise detonation. He has to watch the explosives very closely before they go off. This action will typically kill the bombardier, but sometimes the bombardier escapes unscathed.[1]