For the mob, see Bone Spider.
Not to be confused with Bane spider. 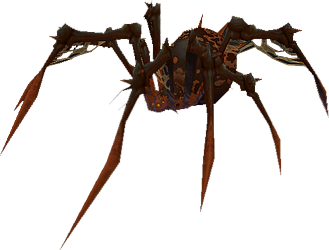 Bone spiders[1][2] or plagued spiders[3] are a unique type of spider that appear to be made up completely of bone. Originally, they were introduced in 'Wrath of the Lich King' and could only be found in Northrend in the zones of Icecrown, Zul'Drak, Azjol-Nerub, and Ahn'kahet: The Old Kingdom. These creatures are already undead when they hatch.[2]

The pale of the Howling Crag are known to turn into bone spiders by using the Ritual of Siphoning.[4][5][6]

These creatures are possibly related to the nerubians who are part of the Scourge.[7]

Bone Spiders may be the bane spiders referenced in the Manual of Monsters.