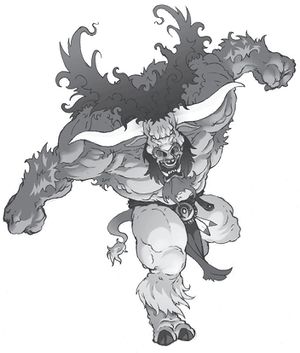 Bone crushers are mostly orcs and dwarves who thrive on pain (their own and others) and focus on the purity of combat. Already confident in just how powerful they are, a bone crusher trains to become a living, unstoppable force. Bone crushers use their heads in combat, literally. No brains needed here. Indeed, some bone crushers claim that they enter an almost meditative state in combat, focused on the smooth motion of their muscles, the speed of their reflexes, noting (occasionally) the blades that bite their flesh, but feeling nothing from them.

They are roaring giants that wade through their enemies, their foes unable to stop them. They do not need weapons; their fists are enough. Arrows and blades bounce off their impervious hide, as they simply ignore any attack aimed at them. Each blow sends their opponents flying into the air. They are bone crushers.

The bone crusher's abilities are, like everything about them, obvious and blunt. Bone crushers are beasts in combat, the ultimate manifestation of strength and raw power. A bone crusher is most dangerous when he charges or overruns an opponent, trampling lesser creatures into the ground or slamming them so hard they are sent airborne. A bone crusher's punches may become strong enough to shatter stone and bones with equal ease. A bone crusher's hide toughens as he grows in strength, and his mind pushes away pain, until he is able to ignore many wounds. Many a foe has lost a battle with a bone crusher when she dealt the beast a blow that would have felled any other combatant, only to have the bone crusher shrug and strike at her once again.

A bone crusher is easily recognizable, even from afar. The bone crusher's body is littered with scars from battle, and he remembers receiving few, if any, of them. He forsakes armor, relying on his own personal strength and toughness to carry him through battle. Few bone crushers bother with weapons, relying instead on their massive fists. The few who choose to wield weapons prefer massive, two-handed weapons, most often bludgeoning or cleaving weapons. Finesse is a foreign word to these behemoths.

The average bone crusher is not much of a conversationalist, either, and is quick to put up his fists in any argument. A bone crusher is more at home in a bawdy tavern prone to bar fights than quiet discussions in a library. Bone crushers are reckless and hard to control, and even harder to stop once they start moving. Bone crushers balk at rules, or literally anything that holds them back. "Less talking, more smashing" is a motto to bone crushers, one that most others learn quickly.[1]

Bone crushers in the world

Most bone crushers reside in the Horde. The Horde respects raw strength, and most of the Horde's races show the raw power that a bone crusher needs. Two races are particularly likely to be bone crushers: Orcs and Ironforge Dwarves. Bone crushers appear often among Orcs and occasionally among half-ogres. Strength is respected among the mok'nathal, and becoming a bone crusher represents the trial to never give up, to never die. Like all mok'nathal, half-ogre bone crushers wander the forests of Azeroth, seeking to prove their strength against increasingly mightier challenges, proving to be the greatest creatures of the wild. Among Orcs, bone crushers are brutal shock troopers, whose battle lust exceeds their immense strength. Forsaken are rarely bone crushers, but occasionally an exception emerges, becoming a front-line warrior.

Among Ogres, bone crushers are seen as the living avatars of Nath, the Ogre war god. In a society that prizes strength above anything else, a bone crusher is as close to a god as an Ogre can get. Once an Ogre achieves the power of a bone crusher, he soon rises to great political power as well, ruling his own clan and leading them to greater glories in battle. Only the strongest may lead the Ogres, and no one is stronger than a bone crusher.

Outside of the Horde, bone crushers are most often viewed as brainless muscle-heads, creatures who think only with their fists. Alliance bone crushers do not receive nearly as much respect as Horde bone crushers do. A bone crusher prefers to answer conflict with a head-on charge, which disgusts more thought-minded races, most noticeably Humans and High Elves. Despite this, even the wisest and calmest of races of the Alliance cannot deny the sheer power that a bone crusher possesses, and those few bone crushers allied with the Alliance are used as guided bombs. A commander simply points at a target, and watches the bone crusher run through all opposition and demolish the desired object. Crude, but effective.

Most bone crushers are barbarians or warriors, and respect anyone else who shows great strength and martial prowess. As shamanistic cultures view bone crushers as spiritual champions, and as Shaman keep bone crushers strong and healthy, bone crushers look favorably on healers. They are especially proud of divine casters choosing to enter close combat, such as Orc Shaman and Far Seers. Bone crushers despise arcanists and rogues however. Arcanists are book-bound cowards who hide in the back of the lines and fling spells instead of risking their hides, while rogues are craven backstabbers who never stick their necks out for anyone. The only magic a bone crusher respects are those spells that make him stronger, allowing him to cause even more destruction and chaos. While a bone crusher tends to respect the strength of a paladin, most bone crushers consider paladins pompous and melodramatic.[3]

Although not referred to in the WoW RPG, some tauren also happen to choose this path as seen in artwork.