The Bonespeakers (also known as the mystic vrykul[1] or the mystics[2]) are a group of vrykul mystics that are supposed to care for the bodies of the vrykul honored dead. They are religious zealots and masters of rune magics.[1] Many of them have a "Shattered Rune" ability. 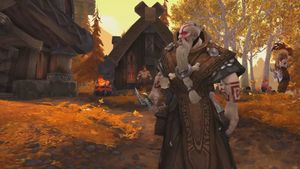 A vrykul mystic in Stormheim.

Many ages ago, Vydhar was transformed with the help of the Highmountain tauren into a tree, his wisdom made eternal.[4]

During the third invasion of the Burning Legion, they ended up forgetting the old vows, except Vydhar. They have been twisted and have sided with God-King Skovald. They sought to use their control over the dead to help him invade the Halls of Valor.[5] Later, they tried to kill the Runewood by turning off the runestones.[6]

At the same time, the Bonespeakers twisted the woods around Vydhar, severely weakening the tree sage. After a hero rescued him from the Bonespeakers,[7] Vydhar agreed to help them speak to the spirits of ancient vrykul rulers if they could gather an aromatic to burn and an offering to them.[8][9][10] He then pointed the heroes to the ancient kings, but not before asking the heroes to lay the spirits of disturbed vrykul ancestors to rest for their own judgment.[11]

On another side, the Bonespeakers stole the bones of Ashildir for the God-King and tried to bind her with the dark energy of Helheim. By this act, they entered directly in war with the Valkyra. Bonespeakers have been slain for their crimes and the ritual to bind Ashildir has been interrupted.[12][13]

Finally, Runeseer Faljar has been confronted in Haustvald.[14] He survived and still has a say in who rules the Tideskorn, one of the options being himself.[15]