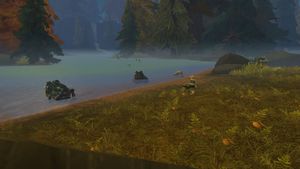 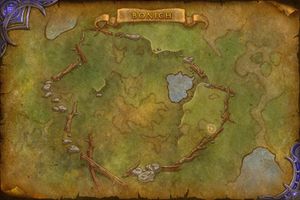 Map of the Bonich scenario.

Bonich is a misty world with a forest of massive conifers surrounding an open meadow, resembling Grizzly Hills. Small bodies of water can be seen. The plantlife here grows very quickly. Bonich's wildlife includes frogs, nether rays, unicorns, and deer, including a particularly large stag named Elkeirnir. Eternal Conservators appear to be dryads living on the planet, though since dryads are the children of Cenarius this may be a case of model reuse.

The native deer are known to shed their antlers, like those on Azeroth.[1]

Occasionally, swarms of stinging insects will travel aimlessly across the clearings, attacking anything that comes among them. There is also a species of mobile vine that travels in writhing masses, pursing targets that get too close.

The Burning Legion's interest in the world is to strip the forests of their resources. In Legion an Invasion Point connects Argus to this target location. 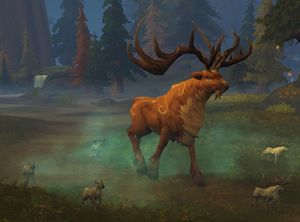 The rapid growth of trees on Bonich may mean the planet has a lot of Spirit. On Draenor, the large amounts of Spirit caused plants to grow rapidly until they eventually became the Evergrowth.