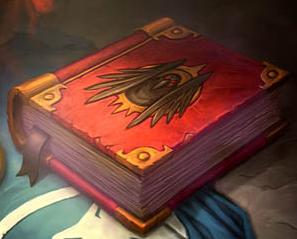 The Book of Medivh refers to the only remaining spellbook[1][2] written by Medivh, the Last Guardian.

An Alteraci mage "guarding" the Book.

Medivh's spellbook was kept in the Royal Library of New Stormwind following his death. It was retrieved by Alterac agents and taken to their kingdom. Teron Gorefiend with the help of Deathwing made a deal with Alterac king - Aiden Perenolde - and got the book in exchange for destroying Alliance outposts in Alterac.[3] Eventually the book ended up with Ner'zhul, who also obtained the Jeweled Scepter of Sargeras, the Skull of Gul'dan, the Eye of Dalaran and used them to open many portals on Draenor. Ner'zhul's portals ripped Draenor apart. Obris held the book on the verge of death, and handed it to Khadgar. Khadgar used its knowledge to destroy the Dark Portal from Draenor's side, thus protecting Azeroth from the destruction of Draenor. But before the Portal was closed, Khadgar sent a Wildhammer gryphon rider with the Skull and the Book back to Azeroth, with orders to give them to the Kirin Tor.[4]

After Archimonde and the Legion left for Kalimdor, the book remained in the hands of Kel'Thuzad.[6]

Kel'Thuzad apparently gave the book to his Cult of the Damned, and was stored by them inside Scholomance. On orders from Gul'dan, members of the Shadow Council led by Jergosh the Invoker retrieve it from Caer Darrow. Gul'dan intended on using the book, along with the Scepter of Sargeras and the Eye of Dalaran, to open rifts through which the Burning Legion can invade Azeroth. Jergosh was killed and the book taken from him by a warlock adventurer.[7] The Eye and the book were later taken to the Tomb of Sargeras for Gul'dan's ritual. While Gul'dan was finally stopped and the Scepter was retrieved from him, it is unknown whether the Eye and the book were also retrieved.[8]

In Karazhan the Shade of Nielas Aran, the involuntary father of Medivh, has

[Medivh's Journal], which could also be considered a "Book of Medivh". Mages from the Violet Eye - a sect of the Kirin Tor sent to spy on Medivh - were looking for the book and went mad when they read it. It was revealed that Kamsis gave the book to the Shade of Aran. When the player reads the book at the Master's Terrace they can watch into the past how Medivh killed the mighty blue dragon Arcanagos, now better known as Nightbane.