Book of the Dead

For the Warcraft III items, see Book of the Dead (Warcraft III). For the Terokkar Forest item, see 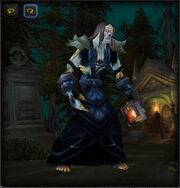 Book of the Dead held in offhand.

The Book of the Dead is a dangerous artifact that belonged to the dreadlord Balnazzar. Using it summons a Summoned Skeleton.

Its antiquity is beyond comprehension, it would seem that magic is the only thing that holds in one piece this thing so fragile that a simple touch would reduce it to dust. The cover and spine are made of dried skin - from what animal, no one knows - and are decorated with the bones of small creatures.

The runes and incantations contained within are written with blood for ink, theorized by scholars to have been punctured on creatures still living at the time of their sacrifice.

The runes of the book were copied using ordinary ink, then kept under high magical protection in the Cathedral of Light in Stormwind, in order to be able to recognize the language inside if it were to be seen written elsewhere.[1]

This item drops from Balnazzar in the Stratholme Main Gate wing.

This ancient, musty tome is decorated with inlaid bones from various creatures. The cover and spine are made from dried skin stretched and treated to remain flexible. The ink used to write the magical words and runes inside is blood drawn from the veins of living creatures killed as sacrifices when the book was completed.[2]