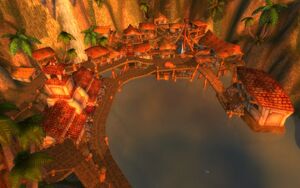 “This booming coastal city is run by Baron Revilgaz of the Blackwater Raiders. Mortal enemies of the Bloodsail Buccaneers and part of the Steamwheedle Cartel.”

Booty Bay is a large pirate port city nestled into the cliffs surrounding a beautiful blue lagoon on the southern tip of Stranglethorn Vale. The city is entered by traversing through the bleached-white jaws of a giant shark.

The area was previously known as the Blackwater Cove[1][2] and was described as a large, sheltered, semi-circular cove surrounded by cliffs at the southern end of Stranglethorn Vale. It was a former small port town inhabited by humans which was overrun by jungle trolls.[3][4][5] Eventually, the goblins of the Steamwheedle Cartel managed to drive out the trolls from the immediate area to claim the shores of the cove for their new center for operations in the Eastern Kingdoms — Booty Bay.[1][2][6] This happened prior to the First War, as Booty Bay was already territory of the Steamwheedle Cartel by then.[7]

After the Second War, two orcs visited the town. Bloodeye Redfist, having been a hotheaded troublemaker, was about to be captured by goblins but Rehgar Earthfury bought him from the goblins.[8] 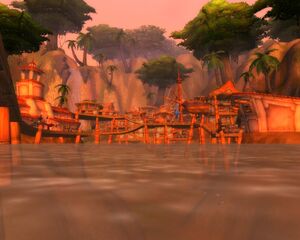 Run by the Blackwater Raiders who are closely associated with the Steamwheedle Cartel, the port offers facilities to any traveler passing through, regardless of their faction. Combined with the world-renowned Salty Sailor Tavern, it is one of the most popular locations in Azeroth.

Outside of Booty Bay, on the island of Janeiro's Point, is a giant statue of Baron Revilgaz.[citation needed]

Baron Revilgaz, ruler of this city, is hiring all the help he can get against the pesky Bloodsail Buccaneers and other threats of the city. He resides, together with the leader of the Blackwater Raiders, Fleet Master Seahorn, at the top of the inn of Booty Bay.

The water there occasionally has floating wreckage and schools of fish. The Schools that are most often are Firefin Snappers, Oily Blackmouths, and Stonescale Eels. Fishing in the floating wreckage will also give you very high chances of fishing out chests and items, making Booty Bay an ideal place for fishing.

Booty Bay is located at Blackwater Cove, a large, sheltered, semi-circular cove surrounded by cliffs at the southern end of Stranglethorn Vale. It was a former small port town inhabited by humans which was overrun by trolls. Eventually, the goblins managed to drive out the trolls from the immediate area to claim the shores of the cove for their new center for operations in the Eastern Kingdoms — Booty Bay.

During the second Scourge Invasion the port-town received shipment of infested crates.

At some point, a famous dwarven blacksmith, Nori Blackfinger‎, lived and had a shop called Black Finger in the town. It is unknown what happened with the shop after Nori's presumed death.

Li Li arrived in Booty Bay, which Chen had told her about in his letters as a place where many of his adventures had begun. In the Salty Sailor Tavern, a gnome privateer recognized her as a pandaren and said he hadn't seen one since he met Chen Stormstout. Li Li bought the gnome drinks if he told her the tale; he was part of a crew that attacked a ship from Stormwind that Chen happened to be on. While Chen fought them all off, the gnome stole a small box from him which he still had. Li Li demanded the gnome hand it over to her, threatening to knock out his teeth and also promising to buy him another beer. As she turned to leave with her prize, Strongbo appeared and told her to return to the Wandering Isle. Li Li, having expected him, told a pair of goblin bruisers that he took her rocket mount. As Bo fought them off, Li Li ran off into the jungles of Stranglethorn Vale on her way to Stormwind and the ship Chen was on.

Tensions between Booty Bay and the Bloodsail Buccaneers have come to a head.

The statue of Baron Revilgaz was partially damaged due to a tidal wave caused by the Cataclysm, exposing hidden treasure inside. The large red cannons have fallen into the sea, and flotsam and jetsam can be seen littered around the harbor. Booty Bay has been partially damaged.

Vol'jin once visited the town in order to warn Revilgaz about the new threat of the trolls. 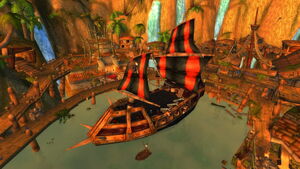 Booty Bay under attack by the Bloodsail Buccaneers.

[Doublerum] is collected, Booty Bay turns into a phased area where the whole town is on fire, the port is blockaded, and Brashtide Raiders storm the area. Many NPCs are still in town, many of those based outside showing themselves to be in terror, others have stationed themselves outside their buildings ready for a fight.

This phase is the easiest, and most lucrative, way to earn reputation with the Bloodsail for the aptly named

[Insane in the Membrane] Feat of Strength.

[Insane in the Membrane].

Killing the Bloodsail Buccaneers and Venture Co. in Stranglethorn will increase your Reputation with the Steamwheedle Cartel.


As of Cataclysm, several goblins of Bogpaddle in the Swamp of Sorrows are part of the Booty Bay faction.

Pirates once anchored their ships here. The tileset is called "Lordaeron Summer".[10]

This dangerous little town is the home base for the pirates who traffic off the southwestern coast of Azeroth. Inhabited mostly by goblins and ruled by Baron Revilgaz, Booty Bay is home to the Blackwater Raiders, a group of notorious pirates comprised of goblins, humans, and many others who swore them allegiance. After a raid, these pirates send their loot up the road to the Arena to sell, or even further into Azeroth.[11]

Booty Bay has a prison which can drain one's will to live.[12]

Well we hate to see her go,
But we love to watch her leave!
She'll do her best for William
And Wes and Mike and Steve!

Her name is spread both far and wide!
Her legend is renowned!
They call her Broadside Betty,
She's the roundest game in town!

So if you've mind to travel south,
Be sure to stop and play!
'Cause she's the real reason
That they call it Booty Bay![13]