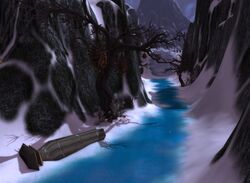 also known as the Bor's Breath River,[1][2] is a frozen river within a canyon located in the midwestern area of the Storm Peaks. It is found almost directly south of Uldis and slightly northwest of Sifreldar Village. At the end of the canyon is a frozen waterfall named Bor's Fall.

The area is a small valley. High mountains surround the valley on opposite sides. Like most of the Storm Peaks, a flying mount helps traversing this area a lot easier due to the hills and mountains.

[80] The Heart of the Storm refers to the area as the Bor's Breath River.

Three extremely rare mobs all needed for the achievement

[Northern Exposure] can be found here and surrounding locations: Time-Lost Proto Drake, Vyragosa, and Dirkee. The Drake and Vyragosa are speculated to share a spawn point and spawn timer.