This article is about the organization. For the in-game NPC, see Boralus Guard (NPC). For the personal guard of House Proudmoore, see Proudmoore Guard.

The Boralus Guard[1] are the domestic city guard in the Kul Tiran capital of Boralus. Acting under the authority of House Proudmoore, the guard keep peace throughout Boralus's various districts, though some remain the territory of cutthroat gangs. Importantly, the Boralus Guard garrison the city's walls and harbor defenses, including the Great Gate, which in turn protects all of Tiragarde Sound.

The city Boralus has long served as the capital of Kul Tiras. Unlike many other human cities, it was not directly attacked during any of the First, Second, or Third Wars and so its defenses remained intact.

During the reign of Lord Admiral Daelin Proudmoore, the Boralus Guard became a highly disciplined and formidable force, an achievement that Daelin took great pride in.[2] The death of the Lord Admiral at Theramore, and the following isolation of Kul Tiras, meant that access to Boralus was strictly closed off to most outsiders. For years, the harbor was the only location visitors got to see. 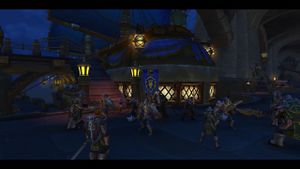 The city guard and the Alliance stand off in Boralus Harbor

When Lady Jaina Proudmoore returned to her homeland in the midst of the Fourth War, the city guard immediately took her into custody on the order of Lord Admiral Katherine Proudmoore. The guard brought Jaina before her mother at Proudmoore Keep, where the Lord Admiral disowned her publicly. Following this, the Boralus Guard were ordered to seize King Genn Greymane and an Alliance delegation in the Tradewinds Market by Lady Priscilla Ashvane, though the intervention of Cyrus Crestfall diffused the situation.[3]

As part of what became the Kul Tiran civil war, the Boralus Guard would clash with House Ashvane thugs in and around Unity Square, as Lady Ashvane herself fled the city. The city guard quickly gained the upper hand and crushed the coup, though the threat from the Ashvane Company remained.[4]

Though well-disciplined years ago, some elements of the city guard had by now become corrupt and lax. Acting on rumors that many guards were in the pocket of the Scrimshaw gang of criminals, Taelia would send agents to investigate dubious guards in the Dampwick Ward. The information proved accurate, with any corrupt members of the guard encountered being brought to justice.[1]

The Boralus Guard were finally put to the ultimate test when Lady Ashvane and a fleet of pirate and Company loyalists attacked Boralus itself, with the intent of ousting House Proudmoore and taking power. Ashvane's forces eventually breached the walls, with fierce street fighting spreading throughout the city. With the help of Alliance champions, the city guard was able to hold the line long enough to gain the upper hand. The death of Viq'Goth and the invaders' commanders marked a temporary victory over the attack.

Amid the fighting, a force of Horde infiltrators also made their way into Boralus and assailed its defenders.

Eventually, however, another wave of ships led by Ashvane herself approached the city. Boralus's defenders and its harbor defenses had been decimated, with little chance remaining of holding off the attack. It was only with the intervention of the Kul Tiran fleet, called by Jaina Proudmoore, that Boralus was saved and final victory secured.

The Kul Tiras City Guard mentioned in Cycle of Hatred is likely another name for the Boralus Guard.