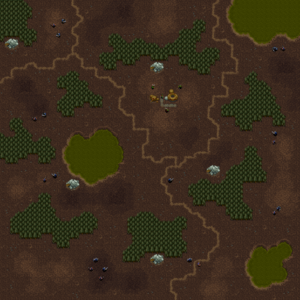 Landscape of the Borderlands as seen in Warcraft: Orcs & Humans.

The Borderlands, the former name of an area within the region of Azeroth, was mentioned during the First War as being located between Elwynn Forest and the Black Morass.[1][2]

Both the Kingdom of Stormwind and the Orcish Horde launched assaults to secure them, from a stronghold outpost in the southeast of Elwynn Forest, and from a small outpost on the edge of the Swamp of Sorrows respectively.[3]