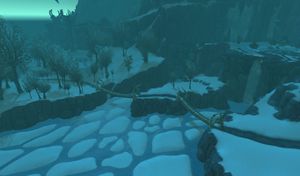 As seen from the Dragonblight.

An unnamed river runs from the largely drained Lake Wintergrasp, over a high waterfall, and down to the sea, forming the boundary between the Dragonblight and Borean Tundra. At its end, the river empties into the Frozen Sea through a wide delta that forms a myriad of tiny islands. It runs just near Westwind Refugee Camp. Coldwind Pass crosses over it.