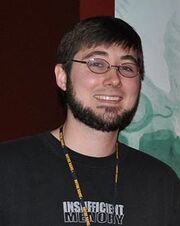 Bornakk (real name Liam Knapp) is a member of the CM team on the US forums. Apparently, he sat across from Drysc at one time.[2] His avatar was inspired by one of the novels[3] and chosen because he likes the lore behind the Mag'har, as well as the mohawk.[4]

Bornakk is part of the Community Team that won "Best Community Management team" at Dragon*Con 2012.[5]

Bornakk once had a

[Tiny Crimson Whelpling] drop from the first dragon mob he killed in the Wetlands, to the chagrin of Eyonix, who was still grinding through over 2000 dragon mobs for the same one at the time.[6]