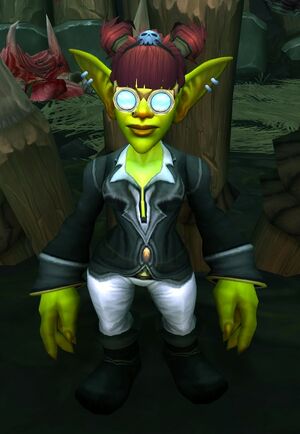 Boss Mida is a goblin of the Bilgewater Cartel. Before being replaced by Orgrimmar Embassy, Mida was in charge of the Goblin Slums of Orgrimmar. Three other goblins are associated with her: Bruiser Janx, Engineer Niff, and her personal assistant Kazit.

During the Burning Legion's third invasion, she is also found in the Hall of Shadows.

In the course of the Fourth War, she was sent by Trade Prince Gallywix to prepare Warfang Hold in Stormsong Valley,[1] being charged with clearing the area of Alliance spies and their apparatuses prior to the meeting of the Horde leaders.

She also appears in Rustbolt on Mechagon Island.

During the vulpera recruitment questline, Mida and Kazit can be found in the Twilight Vineyards in Suramar City, having been sent to assist in producing arcwine for the Horde alongside Micah Broadhoof and Nomi. Vintner Iltheux put Mida in charge of stomping fruit, and she can initially be found ordering Kazit to do so, to poor results.[2] When Meerah and the Horde adventurer arrive at the vineyards to help with production, they reassign Mida and Kazit to the more suitable role of gathering ingredients.[3] Mida can subsequently be found acting as a vendor and sells the

According to Engineer Niff, who is working on Mida's shredder, "She don't like movin' around the city on foot like any old chump, ESPECIALLY if she's gotta go deal with the warchief." As Niff reveals, the shredder behind her is in fact hers.

Boss Mida stands slightly taller than the playable and NPC goblins, a trait shared by faction leaders and other characters of note. This is probably in reference to her title.

Based on her gossip text, Boss Mida may have very well planned and built the Goblin Slums, as well as possibly assisted in the reconstruction of Orgrimmar altogether after the Cataclysm.

[Mind Control], it has been learned that she has the abilities

[Sprint], indicating that she is a rogue, as the fan base originally wanted. (See below.)

Initial
Don't mind the mess, we're still settin' up.
Don't let that stop you from enjoying yourself, though! Relax, spend some coin... we've got everything from money changers and laundry services to exotic drinks and fishing trainers.
And if anyone gives you any trouble? You just let ME know, and I'll handle it.
I'm Mida... the boss.

Alternate
Look around... business is BOOMIN'!
While Gallywix is wastin' time pickin' custom wallpaper for his Pompous Palace in the Azsharan boondocks, I'm makin' twice the coin movin' and shakin' for Big G.
You heard me; Counting houses, trade halls, construction and maintenance, the war-works, supply lines...
Don't even get me STARTED on transit! Orcs can fight, but they can't move goods; my boys ship it twice as fast for half the cost! Well... when it doesn't blow up along the way, hee.
Anyhow! Take a load off, huh? Enjoy yourself, spend some coin... we've got everything from money changers and laundry services to exotic drinks and fishing trainers.

Relax, spend some coin... we've got everything from money changers and laundry services to exotic drinks.

And if anyone gives you any trouble? You just let ME know, and I'll handle it.

Oh, the renovations? Yeah, I'm always willing to help our new allies for the right price!

The boss is not gonna be happy about this...

It's finally time for me to be the one relaxin' and spendin' some coin.

This vacation's shapin' up just fine...