They're frantically mining a rare crystal called Resonite. The crystals have a trace of earthen magic.[1]

Deep inside Boulderslide Cavern, the Goggers have dug deep uncovering a Resonite Cask, which houses a slumbering earthen by the name of Goggeroc, who is killed by Horde adventurers at the behest of Mor'rogal.[2]

After the sudden disappearence of Goggeroc, the group was renamed as Boulderslide. However, even without the presence of the earthen, these kobolds still guard the Resonite Crystals with their lives.[3]

Subjugator Devo has submitted several of these kobolds under his leadership as an answer to the cooperation between the Alliance and the Grimtotem tribe.[4] After a quest chain, the subdued kobolds launch a massive assault against the Alliance-Grimtotem forces and ultimately win.[5] 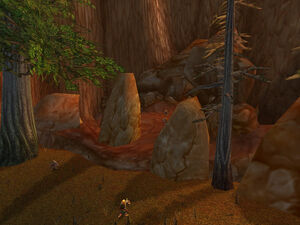