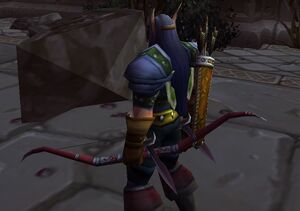 Bow of Searing Arrows is a bow ranged weapon with an extra arrow proc, that does fire damage. It is known for having an unusually high proc rate.

This crimson bow is trimmed in black and gold, with a string that appears to be constantly on fire. It sheds no heat, however, and the wielder can employ the bow without fear of damaging either himself or the weapon. Although the user can employ any ammunition he wishes, he can also will the bow to create its own searing arrows in unlimited quantities. These arrows appear as the wielder makes the normal motion of reaching into a quiver.[1]

The bow is a world drop.

This bow could be a reference to the energy bows carried by Priestesses of the moon in WC3, and could very well be the same weapon.