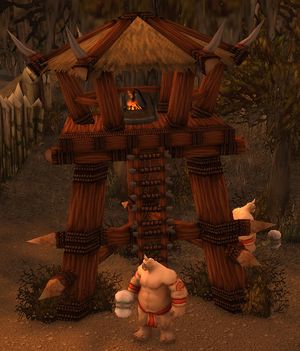 Brackenwall Village is a small Horde-affiliated outpost in northwest Dustwallow Marsh. It is run and populated mainly by ogres. Besides a few huts, the village also counts an ogre mound.

After the black dragonflight destroyed Stonemaul Village in the southern part of the Marsh, Mok'Morokk' Rexxar's successor, led them north[1] to establish Brackenwall as their new home.[2]

Just prior to the Attack on Theramore Isle, Warchief Garrosh Hellscream and his army passed through the village and gathered reinforcements.[3]

Throughout the Pandaria campaign, the Brackenwall have been a little active. They sent Or'Dac as their emissary.

Brackenwall represents the only Horde presence in Dustwallow. It is also the home of the Stonemaul ogres, who had maintained a village of their own but were driven out by agents of the black dragonflight. The Stonemaul ogres have remained allied with the Horde since the Third War when the half-ogre Rexxar defeated their leader in combat and took command of the tribe.

Daelin Proudmoore's loyalists harass Brackenwall, but Jaina keeps her own troops reined in. Most of the Horde members here try to trade with Theramore peacefully, but there are a few that organize groups to attack travelers.[4]

As the name implies, it may be located in Brackenwall.