Bradensbrook is a Gilnean village located on the bleak coast of Val'sharah. Various homes are situated among the jagged rocks of the foreshore; the residents constantly provoked by its wildlife. The chill, howling winds from the Great Sea buffet this remote settlement.

When the Scourge swept through Silverpine Forest during the Third War, the residents of Pyrewood Village, seeking shelter within Gilneas, found the gates of the Greymane Wall closed to them. Purchasing a ship called the Sea Wolf, many of the residents set sail for Stormwind to escape the undead.

Unfortunately, a storm blew their ship off course. They sailed aimlessly through the Great Sea for several weeks before another storm caused them to shipwreck on the shores of a mysterious island, near the ancient fortress of Black Rook Hold. Since their ship was unsalvageable, and the land plentiful, they built the village of Bradensbrook and settled down.[1]

The town recently fell into peril as Mayor Heathrow's daughter went missing and undead spirits arose, terrorizing the residents. The town would endure and manages to fend off the undead in the area.

Despite their success, it would be short-lived as the Legion launches an attack. The first would come in the form of Imp Mother Gothol, where she would set the land as her personal imp breeding ground. Thanks to the Unseen Path, they would send her back to the Twisting Nether. A satyr named Nanosh the Slicer would also attack the village. With an army of Black Rook Assassins at his side, he was defeated by the Council of the Black Harvest. The third Legion attack came during the Assault on Val'sharah. Rather than attacking them directly, the Legion placed cups of demon blood inside their village. Anyone who drank it would be driven mad and mind-controlled by the demons. Heroes manage to free the citizens and drive the Legion back. 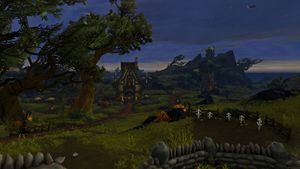 The extension of Bradensbrook, stretching southward.

The entire settlement of Bradensbrook consists of many different residencies scattered along the coast.