“They called us the Bravo Company. When things needed killin', we did the spillin'... of blood.”

Bravo Company was a battalion of soldiers serving in the Stormwind Army. It was led by Corporal John J. Keeshan, who commanded the military unit on the field, and Colonel Troteman, who served as the commanding officer for the entire regiment.

The Bravo Company operated in the Redridge Mountains, waging war on the invading Blackrock orcs. The entire regiment was eventually overpowered by an orc assault and most of its members were killed. Those who survived served as prisoners of war for five years.[1] Only John J. Keeshan managed to escape to Lakeshire, which the townspeople treated him with contempt for his military service.[2] For a while, Keeshan became disillusioned with his hometown and lost the will to fight. 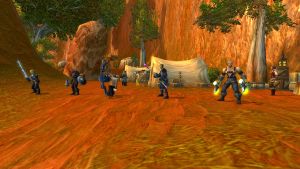 In the Redridge Mountains storyline, the Alliance adventurer was recruited into the Bravo Company and under the guidance of Colonel Troteman, attempted to reignite Keeshan's will to fight by recovering the belongings Keeshan lost and helping reassemble Keeshan's old battalion, the Bravo Company. It has been discovered that all members of Bravo Company were alive but captured by Blackrock orcs and needed rescue.

After having his belongings returned to him and his friends in the Bravo Company reunited with him, Keeshan regains the will to fight.[3] Keeshan leads Bravo Company in an assault on Render's Valley, freeing the prisoners of war located there[4] and then decimating it in an explosion which turns it into a crater.[5]

Bravo Company then discovered from the POWs that the gnolls in Galardell Valley are being controlled by a powerful magus in the Tower of Ilgalar. After retrieving the key to its entrance from General Fangore[6], Bravo Company confront Grand Magus Doane, who alludes to Darkblaze — the mastermind behind the invasion that Doane alludes to before teleporting away.[7]

The Bravo Company later assault Stonewatch, the stronghold of the Blackrock orcs,[8] which culminates in a battle against a black dragon named Darkblaze. During the battle all the members of Bravo Company are killed except for the adventurer, Troteman, and Keeshan, who jumps onto the dying dragon's back. Darkblaze flies over Lake Everstill, and after some struggle, both of them fall into the lake's waters.[9] Both Keeshan and Darkblaze were presumed to have died in the fight, and several of Keeshan's belongings are later recovered by Lakeshire's townspeople. Colonel Troteman states that Jorgensen, Messner, Krakauer and Danforth will receive a proper burial.[10]

It is later revealed that Keeshan survived the encounter and played a role in defeating the Dark Horde in the Burning Steppes. Since then, there's no mention of the organization, and is presumably no longer active.