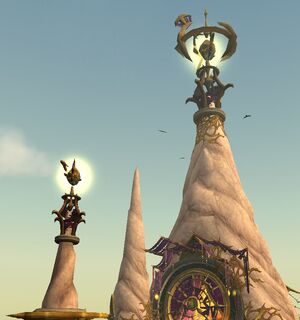 The second Breath of Rukhmar. 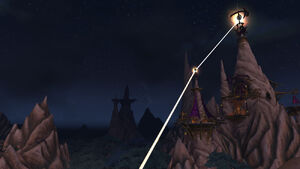 The destruction of Veil Akraz.

The weapon was used two thousand years before the opening of the Dark Portal against the Primals led by Gnarlgar and the Sporemound Taala as they marched on Arak. When it was first activated, a violent tremor shook the spire as solar energies roared through it and a white-hot beam exploded from the mechanism to lance through Taala's chest, blowing it apart in a cloud of spores and ash. The Breath of Rukhmar sliced through the botani, genesaur, and Gnarled, incinerating thousands in an instant. The few that survived retreated to Talador in terror, but they were engulfed in flames by the Apexis's Anhari order. The forests that had crept into Arak were seared away. Once the attack was halted, blackened earth and smoldering roots stretched as far as the eye could see.[1]

1,200 years after the Apexis fell, a recreated Breath of Rukhmar would come to be known as the crystal superweapon[3][4] or Focusing Iris.[5][6] Created by High Sage Viryx using Apexis artifacts, the superweapon focused the power of the sun to destroy the Adherents' enemies.[4] It was used by the Adherents of Rukhmar to scorch the settlements of their ancient enemies, the Arakkoa Outcasts. The main focusing lens was located on top of the pinnacle of Skyreach itself, whilst the secondary lens was located on top of a nearby, shorter spire. Two other focusing lenses, which Reshad called false suns,[7] were located at the Windswept Terrace and Terrace of Dawn. It does not seem to be as powerful as the original Breath of Rukhmar, based on the original's description in Chronicle.

During the rise of the Old Horde, Kargath Bladefist temporarily allied with the Arakkoa Outcasts to kill the Adherents of Rukhmar and destroy the weapon. What the Outcasts lacked in numbers they made up for with their magic and destroyed the mechanism atop the city. A blinding explosion tore through the sky and set the heavens aflame.[8]

At the beginning of the Spires of Arak storyline in the alternate Draenor, the weapon fired on Veil Akraz, burning it to the ground. Veil Zekk was also destroyed. The weapon also played a role in the fight with High Sage Viryx, as she called down the powerful focusing lens to scorch the ground beneath her foes.[4] In this universe, it was eventually rendered useless by destroying the two smaller focusing lenses.

A fel-empowered version may be under construction/reclamation at the Farlight Terrace, if not just a similarly-shaped object.