Brennadam is a large Kul Tiran town, and the regional capital of Stormsong Valley. It is the busiest market and largest trade hub in Kul Tiras outside of Boralus,[2] with the surrounding farmland serving as a breadbasket for the whole kingdom.

Its importance would make it a major target for the Horde during the Fourth War, during which they attacked and overran large parts of the town. In response to this threat and others, Brennadam would become a center for the Storm's Wake militia in protecting the inhabitants of the valley, and for Alliance forces as they lent aid to their Kul Tiran allies.

Brennadam, and all of Stormsong Valley, historically fell under the authority of House Stormsong, a dynasty which ruled the area since humans first arrived there. Eventually, the valley grew into the agricultural heart of Kul Tiras, and Brennadam became a thriving market town for its produce, located near the border with Tiragarde Sound.

At the time of the Fourth War, however, the area would descend into danger and chaos as multiple threats appeared to terrorize its citizens. As the local farmers suffered attacks from quilboar, House Stormsong itself succumbed to the whispers of a dark presence and turned its back on its people. Without protection, Brennadam almost fell when the Horde began an invasion of the region on the orders of Warchief Sylvanas Windrunner.[3] It was only with the aid of a newly-formed militia, bolstered by champions of the Alliance, that Brennadam's citizens were able to hold back the assault and rescue the unarmed civilians who were being slaughtered by the Horde.

Led by Mayor Roz and Sergeant Calvin, Brennadam's defenders fought the Horde in the western section of the town, who were equipped with war zeppelins and siege weaponry. While evacuating civilians and putting out major fires, the militia would also assassinate the Horde's field commander, Champion Lockjaw.[4] By commandeering an enemy Azerite war machine, Alliance heroes were also able to decimate reinforcements coming from Warfang Hold, securing the safety of Brennadam.[5] 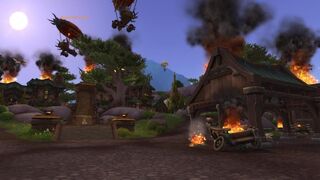 At the same time, Brennadam would serve as a base for Brother Pike, one of the remaining tidesages not taken in by Lord Stormsong's corruption. Many of the town's citizens would gather outside his house and demand answers for the recent disasters. Pike and heroes of the Alliance would eventually set off from Brennadam with the goal of getting to the bottom of these mysteries.

As these events took place, a militia faction formed from local volunteers and uncorrupted tidesages would come into being. Known as the Storm's Wake, they made it their mission to protect the citizens of Stormsong Valley from their recent woes, and Brennadam would become their central hub.

For the inhabitants of the western portion of town, see Brennadam Square.