Brewmoon Festival is an scenario in World of Warcraft: Mists of Pandaria. The event is started by Brewmaster Boof at Binan Village.

Hidden in the shadow of Kun-Lai Summit, the quiet village of Binan has become well known for its yearly Brewmoon Festival. Young Pandaren travel from all over just to taste Brewmaster Boof’s famous Kun-Lai Kicker and take part in the village’s extensive celebration. Despite recent trouble with the local yaungol, Mayor Bramblestaff promises that this year’s festivities will be the biggest yet. Be sure to tell your friends and stop by for this unforgettable event![1] 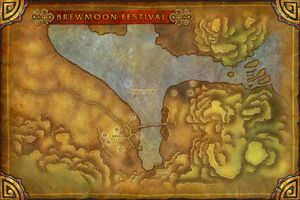