Bridgeport is a major Kul Tiran port town and trading hub located on the inner coastline of Tiragarde Sound, just south of the capital of Boralus. Though under the protection of House Proudmoore, the town has become a base for many of the operations of House Ashvane and the Ashvane Trading Company. From their workshops and warehouses on the docks, they use Bridgeport as a center to ship cargo across the region, often illegally. The town is also the site of an Ashvane chemistry operation, where Azerite continues to be researched and refined.

Bridgeport has traditionally been a major trade hub for the southeastern region of Tiragarde Sound, through which many goods are shipped. In particular, Bridgeport services the nearby Ashvane Foundry, a main production center in the area. As a result of its economic importance, the Ashvane Trading Company maintains offices and workshops within the port.[1]

At the time of the Kul Tiran civil war, Bridgeport became a hotspot for the illegal smuggling of Azerite weapons and munitions by the Ashvane Company. The nature of the cargo was not known by the Proudmoore authorities, even though the port was garrisoned by a battalion of their marines. Hired ships, such as the Maiden's Virtue, carried these weapons on to locations such as Freehold where they were used to arm pirates for Lady Ashvane's upcoming coup.

To further develop their Azerite weaponry, the Company also set up chemical workshops in the port. These facilities yielded impressive new Azerite products, some of which were fine enough to be sent on to Boralus.[2]

Flynn Fairwind and an Alliance emissary eventually arrived in Bridgeport investigating the Ashvane Company's plans. After learning more about the smuggling operation taking place, and securing a sample of Azerite as evidence, they stowed away on the Maiden's Virtue to discover the destination of the cargo.[3] The ship would, however, become wrecked on the coast before reaching its final destination: Freehold.

Later, the Horde would turn its attention on Bridgeport not long after establishing a foothold in Tiragarde Sound. Directed by Lilian Voss, Horde agents laid a trap for the garrison of Bridgeport under the command of Captain Amalia Stone. After causing a scene and luring much of the guard out of town, they detonated a large cache of explosives, killing the Kul Tirans instantly.[4] In the aftermath, Captain Stone's body was recovered by the Horde, and she was eventually raised as a Forsaken. 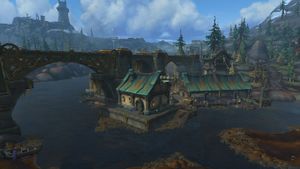 Bridgeport from a distance 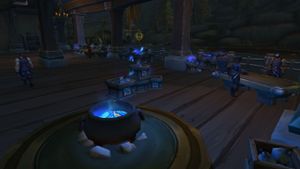