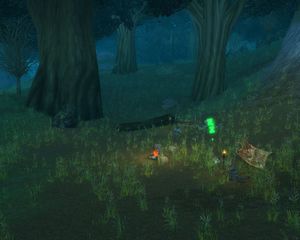 Brightwood Grove is an area in Duskwood. The few buildings that stood at the edge of the grove lie in ruins and Nightbane worgen prowl the dark fields, erecting crude camps and hungrily attacking anyone who come too close. Young Alliance-based adventurers are often sent here to slay some of the wolf men to better control their numbers. The location is just west of Darkshire.

Its only inhabitants were Med'an and Meryl Winterstorm and few individuals knew about them, such as Garona Halforcen and Koron. Twilight's Hammer cultists attacked their home and kidnapped Garona.[1]

During the Burning Legion's third invasion, the Twilight's Hammer cultists returned to the area.[2]

Brightwood Grove in the south holds only the mysterious beasts called the worgen. It was formerly a sunny vacation spot with fertile land that grew flowering trees, succulent fruits, and strong trees. In recent years, powerful monsters have befouled it.[3]