Not to be confused with Briln.

Brill was a small town in the Tirisfal Glades of northern Lordaeron. Like Tirisfal itself, the town was once controlled by the Forsaken. Upon leaving Deathknell, new Forsaken adventurers will be directed to Brill where they will continue the Forsaken's war against both the Scarlet Crusade and the ever-present Scourge. It is located in the center of Tirisfal, directly north of the Ruins of Capital City.

After the Battle for Lordaeron not much is left of the town but rubble and ruins. 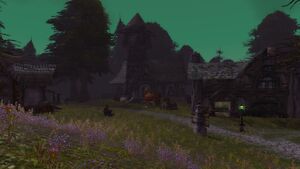 Brill was once a small town within the human kingdom of Lordaeron. It was one of the earliest towns to become afflicted with the Plague of Undeath that would eventually cripple the northern lands. It was at Brill that the necromancer Kel'Thuzad, still a living man, first started his experiments with the Plague that would come to be the demise of the kingdom of Lordaeron. The success of the infestation was such that it allowed Kel'Thuzad to convince the Lich King to launch the invasion even before it was planned. The mass graveyard just outside of Brill was made to accommodate the large number of deaths Tirisfal suffered when the Plague first came. The town's Regional Defenders were unable to save the villagers and eventually, the defense force was pushed out of Brill. There, they joined Prince Arthas during his mission to investigate and uncover the source of the Plague.

Following the weakening of the Lich King due to the spell cast by Illidan, Sylvanas's rebel Forsaken were able to quickly assume control of the town, along with numerous other sites in Tirisfal Glades.[citation needed]

The citizens of Brill now fight daily to preserve their freedom against their enemies.

According to some Deathguards, Brill once had a blacksmith but he turned back into a mindless minion of the Scourge. 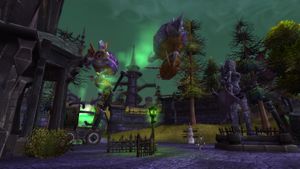 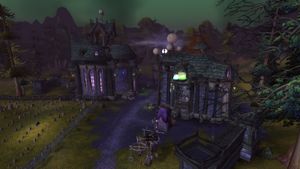 In the wake of the Cataclysm, Brill's buildings had already been updated with the new Forsaken architecture seen in Northrend in addition of a statue of the Banshee Queen.

In the early stages of the Battle for Lordaeron, Brill was completely destroyed by the Alliance in their invasion to retake Lordaeron Keep. Little was left of the town apart from the walls that once surrounded it and some ruins. The Alliance built a camp among the rubble to prepare for the siege.

At least some of the citizens survived since Zachariah Post and Velma Warnam can be found in Orgrimmar afterwards. 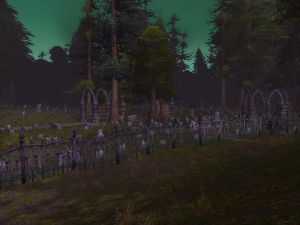 Like all Forsaken, the citizens of Brill are in a constant battle against their former master, the Lich King. Occasionally Scourge will slip past the defenders of the Bulwark, the protectors of Tirisfal from the Plaguelands to the east. The citizens of Brill have taken it upon themselves to be the Bulwark's rear guard, since success at the Bulwark depends on a one-front battle, as well as protecting the supply lines to the Bulwark. They focus their attention particularly on the Balnir Farmstead to the east, which has become a haven for interloping Scourge. The Scourge have also trickled into Tirisfal Glades and infested the area west of Brill, near the old bridge. In addition, the Scourge use the Rot Hide Gnolls at Garren's Haunt to further their cause.

The most significant threat from the Scourge comes from the Agamand Mills to the northwest, which have become a foothold for the Scourge, led by a skeleton named Captain Dargol. Dargol uses the Agamand Family Crypt to raise the ancestors of the Agamands and use them against the citizens of Brill, who must be constantly alert for their attacks.

The Rot Hide gnolls are a group of undead gnolls, controlled by the Scourge, that have set up camp at Garren's Haunt to the north of Brill. Their primary mission is to steal corpses from the mass graves just outside of Brill so that the Scourge may use them to bolster their forces. They are led by a vile gnoll named Maggot Eye.

The Scarlet Crusade have set up their base of operations in Tirisfal Glades at the Scarlet Monastery, high on a hill to the northeast of Brill. In addition, they have a number of outposts throughout Tirisfal Glades (mostly ruined towers from the last war) from which to engage their attacks and raids against the Scourge and Forsaken. The humans at the Solliden Farmstead to the west of Brill aid the Scarlet Crusade in their fight against the undead.

Although Brill is located deep within Horde territory, there is still the threat of occasional Alliance forces attacking from Silverpine Forest and the southern lands. This has increased after the removal of dishonorable kills from the World PvP system, as formerly Brill would be avoided due to the huge amounts of civilians present there. Now, however, there is little to stop willing raiding parties emerging from the south; provided they do not fear the inhabitants of the Undercity nearby.

This once-bustling human city is in Forsaken hands and is their primary settlement outside Undercity. Brill is home to the Gallow's End Tavern, a pleasant if smelly establishment. Adjacent to Brill is an enormous cemetery that holds many dead from the Second War. The Rothide gnolls have been robbing graves recently. Magistrate Sevren, Brill's leader and a surprisingly genial fellow, is trying to stop them.[1]