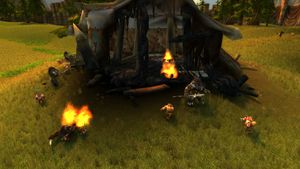 The Bristlebacks of Brambleblade Ravine are at war with the tauren of Camp Narache and they encroached on the area of Red Cloud Mesa. They train Battleboars to be malicious.[1][2] Young tauren entered the ravine and killed the Bristleback leader Chief Sharptusk Thornmantle.[3] The quilboar also ravaged the tauren burial site of Red Rocks.[4]

In the Barrens they were at war with the Razormane quilboar.[5][6] At the start of the war against the Lich King, Bristlebacks became more aggressive and killed a female tauren and her young son. When Hamuul Runetotem performed a ritual for the deceased in Red Rocks a few of them attacked the Archdruid.[7]

During the Cataclysm, quilboar of Mulgore were in turmoil. New High Chieftain Baine Bloodhoof stopped the war against them allowing them to take resources from a newly-created river.[8] Some time later, the Bristlebacks attacked the Red Cloud Mesa tauren once again.[9]

The bristlebacks dig up the blood shards and use them in battles as totems for their strength and magic.[10]

During the Fourth War, several of them appeared on Kul Tiras as members of the Bilge Rats.

Bristlebacks tend to be larger and stronger than most quilboar.[11]