"Krokul" redirects here. For the Broken of Argus known as the Krokul, see Argussian Reach.
For the original race, see draenei. For the race in general, see eredar. For the more corrupted version, see Lost One.

The Broken[4] (also known as Broken Ones[5] and Krokul[6] or krokul[7] in Draenei) are a devolved sub-race of draenei who live in Outland, mutated after being exposed to the fel energies wielded by orc warlocks.[8] Many tribes have joined or become enslaved by the Illidari. When the Dark Portal reopened, several of them tried to get to it and escape Outland.[9]

Another breed of Broken, called by their draenei name Krokul to differentiate them, are found on Argus. These Krokul have been hiding on Argus since the draenei flight from the Burning Legion. They look slightly different than Outland's Broken, having upright bodies and hooves, likely because they were mutated by Argus's fel energies instead of the red mist.

Years ago, the draenei narrowly survived a horrific genocide by the orcish Horde. Blinded by rage, the Horde slaughtered most of the draenei race and forced the survivors into hiding. After being exposed to the fel energies wielded by orc warlocks, many draenei were mutated into physically deteriorated forms known as the Krokul, or the "Broken". Years later, the shaman Ner'zhul opened magical portals throughout Draenor, and the resulted energies shattered the dying world.[8] Although the Broken in Outland (the shattered remnants of Draenor) were thought by many to have been completely wiped out by the orcs' genocide and the world's cataclysm, some survived and have formed various tribes. However, many still fought for survival from the Burning Legion, who had claimed Outland with the aid of their fel orcs. Illidan and his forces discovered a surviving Broken village in Outland during their flight from Azeroth. The village's inhabitants, ruled by Akama, swore allegiance to Illidan in return for him liberating them from orcish and demonic oppression.[10] Having been corrupted by demonic influences, they lost some of their former draenei abilities, and their already Broken forms were further altered, causing them to become the sub-species known as the Broken draenei.

In The Burning Crusade, the term "Broken" is used mainly as a racial name, though sometimes it is used to refer to the Ashtongue Deathsworn. This faction, led by Akama, the elder sage, contains most of the Broken draenei in Outland. They are allied with Illidan Stormrage, and with his naga and blood elves.

Broken draenei are often rejected from draenei society due to their deformities, and inability to use the Light, leading them to eke out miserable existences in Outland's wastes. It is not uncommon for Broken living in Shattrath to throw themselves off elevators, committing suicide as the draenei guards simply watch.[11]

It is unknown how many Broken draenei are in Outland, though there are several groups not serving Akama. Nobundo is a notable Broken draenei shaman, though he is not a follower of Akama. A number of Broken draenei serve as laborers in a crystal mine beneath the Exodar, and appear to be loyal to Velen. It was speculated that this was evidence of prejudice on the part of the uncorrupted draenei, but this could be a case of physical tolerance.

While they are referred to as "Broken", even by themselves, many, including Akama himself, still consider themselves draenei. Some are trying to find a cure to return them to their original forms.

Even further below on the social scales are Draenei Lost Ones, who even many broken shun.

In Warcraft III, Akama's tribe possessed the Lost Ones physical appearance. As Lost Ones, they were renowned for being unbeatable spies and assassins, as their warriors can

[Shadowmeld] regardless of the time of day and even while moving. This was before the retcon to the draenei/eredar history and the introduction of the Broken. Akama's new appearance is primarily that of a Broken draenei, although he possesses the characteristic mouth of the Lost Ones. 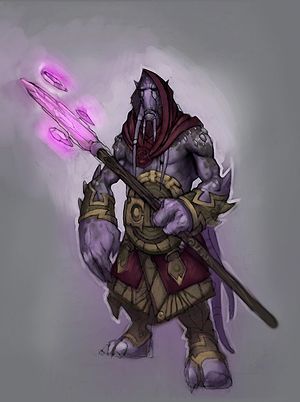 In recent years, Velen, the noble leader of the draenei, was granted a vision...in it he saw the Broken; formerly healthy draenei who had devolved during the orcs' murderous crusade to wipe out the draenei race. According to Velen's vision, the Broken would rise to power once again and aid their displaced brethren.

Velen's vision was given substance in the form of Nobundo, a one-time draenei Vindicator who had devolved while the orcs decimated his race and tore the planet apart. Like his fellow Broken, Nobundo had lost contact with the Light, and so he ventured far into the deserts of Outland to meditate and pray for guidance.

After decades of silence, an unfamiliar voice finally answered his prayers. It was not the Light that whispered to him, but the wind. The breeze spoke to him of lost truths, of the might of the elements – of the delicate balance of power embraced by the shaman.

Nobundo listened eagerly and learned all he could. When he judged the time was right, he departed the desert determined to use this knowledge to help the draenei race. However, most draenei refugees greeted the sight of a Broken with skepticism and outright prejudice. Only one of the healthy draenei did not shun the Broken: the wise and perceptive Velen.

Velen had heard the philosophy of the shaman before, but Nobundo revealed new truths. The elements were timeless; they stretched across the cosmos to inhabit every world they touched. With the proper training, the draenei might learn to wield this overlooked, seemingly inexhaustible source of power. Velen rejoiced to realize that his vision was coming to pass. Accordingly he took Nobundo with him when he and his fellow refugees took possession of the naaru satellite structure Exodar from the blood elves. Thus it was that Nobundo journeyed with the draenei to the world of Azeroth.

Nobundo found that unlike the desolate wastes of Outland, Azeroth possessed abundant elemental energies. He shared his knowledge of shamanism with the draenei on Azeroth, and all who adopted its path flourished.

The time for the draenei shaman to test themselves draws near, for the battle against the Burning Legion is once again at hand. And the fate not only of Azeroth, but of all worlds, hangs in the balance.

When the Alliance invaded Outland, many draenei sought to reconnect with and redeem their Broken kin. Some of these Broken they reached out to included the Kurenai in the Orebor Harborage[12] and the Feralfen Lost Ones in the Boha'mu Ruins.[13] While the Feralfen refused to re-assimilate with draenei society,[14] the Kurenai were more receptive to reconciliation.[12]

The Alliance would later solidify diplomatic relations with the Kurenai in Nagrand after helping them secure their home of Telaar from various threats. However, the Kurenai and the draenei didn't always see eye to eye, particularly on the issue of the Lost Ones. While the Kurenai were content to help the Lost Ones who sought them out, they didn't pursue them and those who went too far were immediately put down. Some of the draenei, on the other hand, were intent on 'redeeming' them all. The Kurenai appear to be fierce enemies of the Daggerfen tribe — whose use of poisons and deceit they found distasteful[15] — and later on the Murkblood tribe for their role in harming their ecosystem and creating hostile relations with the Mag'har.[16] The Kurenai were also not fond of the Horde due to the orcs' role in the genocide of the draenei people.[17]

Many of the other Broken tribes appear to have been conquered or sold into slavery by the Illidari. This appears to be the case for the Wrekt,[18] Wastewalker tribe,[19] and the Dreghood tribe, although some Broken were enticed to betray their Broken kin in exchange for promises of power.[20]

Sometime after the reopening of the Dark Portal, Broken exiles crossed the portal into Azeroth and made a home for themselves in the Swamp of Sorrows. They settled in the Harborage, and sometime during that time, Anchorite Avuun came to live with them and study their transformation.[21] Avuun worked for years to try to cure the affliction of the Broken. The foul energies that corrupted them did more than twist their bodies - it took the comfort of the Light from them so they cannot feel its warmth.[22] Avuun was also eager to help Magtoor who grew ill and weaker every second. Avuun desperately sought a remedy to cure Magtoor but despaired when his remedy failed. As Magtoor began to pass away, Avuun pondered why the Light forsook the innocent. A portal from the Exodar opened and Prophet Velen stepped through. Velen explained that the Light wishes suffering on none, but it does not reign unopposed in their realm. As Magtoor had embraced his plight bravely he was ready to return to the embrace of the Light. In his final moments, Velen performed an unction on Magtoor as he passed away.[23]

During the joint attack on Argus by the Army of the Light and Armies of Legionfall, the heroes of Azeroth came across Krokul led by Chieftain Hatuun, the Argussian Reach. They had lived on Argus all this time, having sought escape but finding themselves trapped in a nightmare.[25] They changed and endured without choice, hidden underground in hovels they moved to and from every time the Legion discovered them,[26] and resent the draenei who fled for abandoning them. When the Army of the Light's flagship, the Xenedar, fell, they brought High Exarch Turalyon to safety in their current home, the Krokul Hovel.[27] They seem inclined to shaman magic and have a Sacred Stone within Krokul Hovel from which they hear the faint whispers of Argus, the world-soul of their planet.[28] The Burning Legion uses the Krokul both as a labor force and tortures them for fun. Their mount of choice is the talbuk.

One of two fates await Krokul prisoners taken to Nath'raxas Hold. Consume the fel, and become a willing soldier of the Infinite Army, or be mutated into a disfigured abomination, an ur'zul.[29]

Despite the (in most cases) accidental regression into Broken draenei, many draenei not only distrust them but despise them.[31] Although understandable of those Broken draenei who remain corrupted or in service to the Legion, one would think that the draenei would be willing to welcome any of their people that survived the orcs' genocide. Talking with Nobundo, however, reveals a possible reason for this distrust and hatred. Broken draenei are unable to draw upon the Light's powers, being infused with fel energies. The draenei, being deeply religious, could view this in a very negative context.

Some draenei such as Velen, work to reintegrate Broken into draenei society. The fact there are so many Broken draenei working in and on the Exodar is a testament to Velen's unending compassion for his people. Yet sometimes even in societies such as Shattrath, the social rejection from other draenei can turn Broken suicidal, while uncorrupted draenei guards watch, presumably viewing an ended life as better than a Broken life.

Still despite this rejection, Broken are in general accepted more than the Lost One draenei.

In Shadow Wing, a female Broken is visible in the crowd. She simply looks like a female draenei with Broken facial features.

Their audio dialogue in The Burning Crusade seems to suggest that the Broken (as well as some Lost Ones, who use the same voices) are slowly losing their memory, even their sanity. They speak in a slow, clumsy manner with irregular pauses. However, they appear to be struggling against this change.