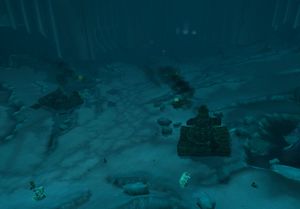 The Broken Front is the sub-region of Icecrown located just south of Mord'rethar: The Death Gate. Many daily quests from the Skybreaker and Orgrim's Hammer require you to come here to slay Scourge forces.

The Alliance set into motion an offensive against the Scourge forces at the gate of the Broken Front, with the intent to steal a march on the Horde and take possession of the gate. The operation was planned in secrecy, and would likely have succeeded but for a chance encounter with a Horde recon patrol.[1]

Argent Crusade forces arrived late to the battle after all three sides had mutually annihilated each other. They were able to retrieve a few members of both the Alliance and Horde forces back to Justice Keep, but the majority of the gravely wounded remained where they fell.[3][4] In the end, the Scourge still remained in control of the gate.[5][6]

The actions of the Horde's forces did not go "unrewarded", however. When Orgrim's Hammer's captain, Sky-Reaver Korm Blackscar, sent in a report to Warsong Hold in support and praising the patrols' actions, he didn't know that none other than Warchief Thrall would be there to read the report and voices his disgust at the cowardly actions of the patrol's "selfless bravery" and "courage". Overlord Garrosh Hellscream apparently agreed, and had Blackscar immediately report to the hold to reprimand him.

In front of Thrall, Garrosh tells Blackscar that there is no combat but honorable combat, and that he will not have cowards among his ranks. When Blackscar offers his resignation, Garrosh instead orders him to return to Orgrim's Hammer and lead his forces in a manner worthy of the Horde. If he doesn't, the only thing Garrosh will ask for is Blackscar's head on a pike.[7]