For the The Frozen Throne mission, see The Broken Isles (WC3 NightElf).

“The Broken Isles are shrouded in mystery and intrigue. Their jagged coasts, lush forests, and colossal mountains are home to ancient ruins and cultures not seen by outsiders for thousands of years. Every stone has a story to tell; every cavern holds the promise of a new discovery.”

The Broken Isles are a chain of islands located northeast of the raging Maelstrom. Littered with ancient elven ruins, they contain notably the mighty nightborne city of Suramar as well as the long-lost Tomb of Sargeras. The third invasion of the Burning Legion commenced when the sealed portal inside the Tomb was opened again by Gul'dan from the alternate universe.

The Felstorm erupts from the Tomb, and the third invasion of the Burning Legion commences. 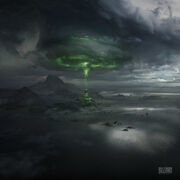 The Felstorm and the Broken Isles.

Before the Great Sundering, the region that would become the Broken Isles was a part of the Kaldorei Empire on Ancient Kalimdor. It was here that the ancient forest of Val'sharah, home of Cenarius, was located, as well as the city of Suramar, hometown of Tyrande Whisperwind. Malfurion Stormrage and Illidan Stormrage also grew up there. The Sundering blasted a part of Suramar underwater, though the majority of the city was saved by the future nightborne thanks to a magical bubble that shielded the city.[2]

Aegwynn, the Guardian of Tirisfal, came to the island of Thal'dranath seeking a safe place to entomb the corpse of the avatar of Sargeras, knowing it still held power. She thus placed his body in a titan facility underneath the sunken Temple of Elune, which would eventually become known as the Tomb of Sargeras.[3][4]

During the Second War, Gul'dan abandoned the Horde and led his Stormreaver and Twilight's Hammer followers to the Broken Isles, seeking the power of the Tomb for himself. The warlock and his men raised Thal'dranath,[5][6] from the bottom of the sea. As he opened the Tomb, he was torn to shreds by the demons inside. Doomhammer loyalists of the Blackrock and Black Tooth Grin clans then finished Gul'dan's troops,[7] though the Hammer and Cho'gall managed to survive and escape.[8]

During the Third War, Maiev Shadowsong chased escaped prisoner Illidan Stormrage to the Isles, who searched for the Eye of Sargeras. She discovered the remains of the ancient night elf city of Suramar, as well as a never-ending battle between the undead remnants of the Twilight's Hammer, Blackrock, and Stormreaver clans.[9] Maiev pursued Illidan into the Tomb of Sargeras, but Illidan found the Eye first and used it to collapse a section of the tomb onto Maiev's forces.[10] Maiev sent a runner to return to Kalimdor and get help from Malfurion Stormrage,[11] who rescued her forces and pursued Illidan.[12]

The Broken Isles are a new continent introduced in World of Warcraft: Legion and are the main setting of the expansion. The Tomb of Sargeras has been reopened and demons have began to pour into the isles. 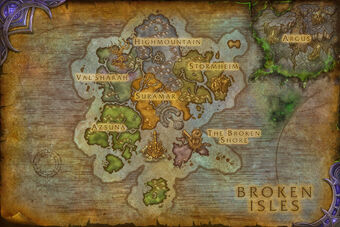 Map of the Broken Isles.

The Broken Isles include about four large (relatively speaking) islands and about three small islands. They were underwater until a scant few decades ago, when the orc warlock Gul'dan raised them from the ocean floor. Gul'dan was searching for the tomb of the fallen Titan Sargeras, and indeed he found it: The ancient Kaldorei structure stands on the largest isle. Other Kaldorei ruins, remnants of their culture from 10,000 years ago, stand on the other islands. For having been underwater for the better part of ten millennia, they look pretty good.

The Broken Isles are an unpleasant and dangerous place. The Death Hiss tribe of naga dominates the region, led by Tide Priest Harash. Other threats are abundant as well: giant turtles, hydras, wendigo and a host of other dangers occupy the areas the naga are not. Also, a few goblin merchants have managed to carve out some spaces for themselves with the help of hired mercenaries.

Five hundred years ago, Magna Aegwynn, Guardian of Tirisfal, slew the demon Sargeras, though just his physical form as his spirit inhabited her body and later possessed her child, Medivh. Knowing that the demon-Titan's corpse still had power, she sought a safe place to entomb it. She discovered a Kaldorei ruin deep beneath the sea, near the Maelstrom, and placed the body within, believing it to be secure. Time proved her incorrect.

Centuries later, Medivh, possessed by Sargeras, convinced the orc shaman Gul'dan to lead his people through the Dark Portal to wage war on Azeroth. Medivh–Sargeras offered Gul'dan a powerful artifact called the Eye of Sargeras as incentive. Gul'dan grew impatient, though, and through magic and research divined the location of the Tomb of Sargeras. He raised the Broken Isles and entered the tomb. Gul'dan encountered many trials within the tomb. He kept a record of his experiences — a sort of diary — by painting Orcish runes onto the tomb's walls. Orc forces loyal to Doomhammer attacked Gul'dan's Stormreavers, and the shaman desperately sought the Eye. In the end, he failed, and the tomb's demonic guardians tore him asunder.

Many years later, some time after the Third War, Illidan Stormrage, the Betrayer, traveled to the Tomb of Sargeras. Like Gul'dan, he too sought the Eye of Sargeras, supposedly intending to use it in a ritual to destabilize and destroy the Frozen Throne. The night elf warden Maiev Shadowsong tracked Illidan to the tomb. While there, she crossed paths with Drak'thul, and the warlock convinced her to help put some of the undead orcs to rest. She did so, though after she discovered that Drak'thul was part of Gul'dan's original coven and partly responsible for raising the Broken Isles and thus bringing dangerous artifacts like the Eye of Sargeras back into the world. She regretted her decision. Also within the tomb, Maiev discovered pieces of an artifact called the Orb of Shadow, and when she collected the entirety of the object it gave her great power. Maiev and her forces confronted Illidan deep within the tomb and interrupted his ritual. Illidan used the Eye to flood the tomb and escaped. Out of all the night elves, only Maiev had the power to escape death, and the loss of her forces embittered her. Since that time, naga and murlocs have emerged to claim the Broken Isles, and undead orcs continue to fight the Second War.[14]

The Maelstrom's proximity ﬁnally proved too much for the Broken Isles, and they began to sink back into the sea. Before they did, however, several factions — including Theramore's mages and Ironforge's Explorers' Guild — wanted to save the library of Izal-Shurah. They sent expeditions to treat with (or destroy) the library's makrura defenders. Complicating things were the naga, who were out in force, believing that the sinking of the isles was a time for celebration and a good omen for their culture. Moreover, the few orc survivors from the Second War and several roving bands of mercenaries attempted to storm the Alliance's ships in a desperate attempt to save themselves.[15]

People aren't particularly prevalent in the Broken Isles, but cultures certainly are. The dominant force is the Death Hiss naga tribe. They have several bases throughout the region, and their forces are strong. Naga myrmidons, sirens and royal guard are out in force, posing a threat to all sensible races. The terrain favors the naga as well; if you're forced to flee the creatures, you can run only to the shore, and then they've got you. The naga live in Kaldorei ruins and have constructed some of their own buildings as well. The architecture is frighteningly similar. The Death Hiss naga have a distinctive warcry: the hiss, from which they take their name, which sounds like rain striking the ocean.

The Lostfin tribe of murlocs is also strong in the Broken Isles. They, a few other murloc tribes, and some mur'gul tribes live in stilted huts on the shores. You can also ran across sea giants and makrura. These two races aren't quite as bad as the others. Constant fighting against the naga, murlocs and other threats can do poor things to anyone's disposition, and makrura tend to attack intruders on sight.

A few enterprising goblins manage to set themselves up on the islands as well, hiring out boats to make travel among the islands easier. They cater solely to adventurers. They brought mercenaries with them, to carve out locations for their shops and to protect them, and now the mercenaries hire themselves out to adventurers as well. The mercenaries myself seem to focus their efforts against the naga and murlocs and other native creatures.

One other culture exists on these islands: orcs. These aren't orcs from Thrall's Horde, either, and many of them aren't even alive. During Gul'dan's betrayal, forces from the Blackrock, Twilight's Hammer, and Stormreaver clans clashed on the newly-summoned Broken Isles. The demons that guarded Sargeras's Tomb slaughtered the survivors, and now these skeletal and ghostly orc warriors battle each other for eternity. A few orcs, however, are not dead. These are mostly leftover warlocks from Gul'dan's clan, the Stormreavers, who were canny or lucky enough to escape destruction. They are scattered across the islands and have been living as hermits, probably eating crabs ever since the Second War. It is possible that a few more warlocks used to abide here, but they were voted off the islands. The oldest and sanest of these Stormreavers is a warlock named Drak'thul.[16]

The Broken Isles in Lands of Mystery.

Rain-lashed islands with ancient ruins and palm trees. That pretty much sums up the Broken Isles. The four large islands are arranged in a bit of a circle, with one large island at each point on the compass. All sorts of nasty beasts live here.

Since the islands haven't been islands for very long, natural life hasn't had much a chance to get a foothold here, but palm trees, tropical fronds, and a few flowering plants push through the ruins. Coral is prevalent, and there are at least a dozen albatrosses. The coasts boast hermit crabs and colorful fish. Purple, black and orange urchins inhabit tide pools and the shores around the coral reefs.

Stormreaver Bay is natural bay between the southwestern islands which boasts a bit of history. Gul'dan anchored his ships here when he was exploring the isles. The ships are long smashed, but their remains still drift in the aptly-named Stormreaver Bay.[17] The Broken Isles are being pulled toward the Maelstrom, and they will likely be destroyed at some point by the magical forces of the storm.[18]