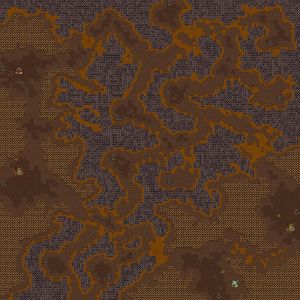 Brokenrock Mountains is an official Warcraft II: Battle.net Edition custom map created by Blizzard and released on the Warcraft II Strategy website for download on November 12, 1999.

Towering over the fetid swamps of Draenor, the Brokenrock Mountains have long been a vital source of gold. The precious metal, sought after by the Orcish clans to fuel their rampaging war machines, has always been a prize worth fighting for. While an age old pact between the clans grants members of the Horde equal access to the vast riches of the mines, clan chieftains occasionally attempt to seize control of the entire mountain range for themselves. These greed-driven leaders learn all too soon that the "specialized mining techniques" of the Goblin Sappers has made the mountain passes very difficult to hold...[1]