This article is about the ruling family. For the clan as a whole, see Bronzebeard clan. 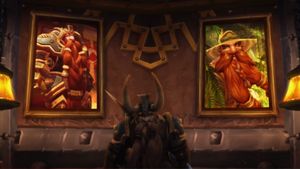 Bronzebeard is the ruling family of the dwarven clan of the same name.

The hardy dwarves of Khaz Modan lived in peace for many long centuries. Long ago, the Bronzebeard clan was small. It was under Aegrim Bronzebeard that the clan began to flourish and command respect.[1]

Roughly 230 years ago dwarven society grew too large within the confines of their mountain cities. Though the mighty High King, Modimus Anvilmar, ruled over all dwarves with justice and wisdom, three powerful factions had arisen amongst the dwarven society. The Bronzebeard clan, ruled by Thane Madoran Bronzebeard, held close ties to the High King and stood as the traditional defenders of Ironforge Mountain. The Wildhammer clan, ruled by Thane Khardros Wildhammer, inhabited the foothills and crags around the base of the mountain and sought to gain more control within the city. The third faction, the Dark Iron clan, was ruled by the Sorcerer-thane Thaurissan. The Dark Irons hid within the deepest shadows under the mountain and plotted against both their Bronzebeard and the Wildhammer cousins. The mountain was shared by all three factions. Tensions were held to a reasonable amount until the high king of the dwarves, Modimus Anvilmar, died. After his death and before his eldest son could be officially crowned, civil war broke out between the three clans. None know who struck the first blow—Bronzebeard and Wildhammer dwarves blame the Dark Irons, while the Dark Irons blame the Wildhammers.

All three factions fought for supremacy, embroiling the dwarves in a civil war. The civil war raged on for many years all over Dun Morogh, until one day the Bronzebeard appeared to be victorious. In their victory, the Bronzebeard banished their Dark Iron and Wildhammer brethren from the mountain. As a token of reconciliation, Madoran Bronzebeard, now Lord of Ironforge, offered the now-deposed prince of the Anvilmar family and his descendants a permanent seat on Ironforge's senate.[2]

Following the defeat of Thaurissan and the Dark Iron clan, Madoran had the Thandol Span bridges built to maintain links with the Wildhammer clan dwarves in the Hinterlands. Ever since then, the Bronzebeard dynasty's reign has in general, been prosperous. They've managed to maintain peaceful relations with the Wildhammer clan and extended diplomatic relations with the humans and gnomes. Their alliance with humanity would eventually be formalized in the Second War when Ironforge’s dwarves offered to join the Grand Alliance after Lord Anduin Lothar aided them in wresting control of Khaz Modan from the vile Orcish Horde. Led by King Magni Bronzebeard, the city’s resilient inhabitants proved to be the backbone of the Alliance forces, helping to secure victory after victory against the orcs. Ever since that time, Ironforge’s dwarves have remained an invaluable part of the Alliance.

Other members of the Bronzebeard line have branched off and made a name for themselves in their own right. Muradin was believed to have perished in Northrend when the young Prince Arthas Menethil claimed the runeblade Frostmourne. However, recent events have indicated he survived and became King of the Frostborn under the name of Yorg Stormheart. He later went on to become an Alliance war hero in the War against the Lich King.

Brann is an active member of the Explorers' League. He became one of the greatest explorers to ever wander the lands of Azeroth. Recognized and welcomed across the known world, Brann is one of the first dwarves to tread the unknown paths of the Titans. His exploits into the long forgotten ruins and lands of ancient civilizations have made him renowned in the field of archaeology.

King Magni's daughter, Moira, married Dagran Thaurissan: emperor of the Dark Iron clan and clan Bronzebeard's archenemy. Believing that she was captured and seduced via magical means by Emperor Dagran Thaurissan, King Magni sent a team to assassinate Emperor Thaurissan and rescue her. To Magni's disbelief, Moira revealed that she was truly in love with Dagran and is pregnant with his child. Their baby: half Bronzebeard by his mother and half Dark Iron by his father, makes him the heir to both the Kingdom of Ironforge and the Dark Iron clan.

In the wake of King Magni's petrification, Moira returned to Ironforge with her infant son Dagran Thaurissan II to claim the throne. Backed by the Dark Iron clan, Moira ruled Ironforge arrogantly and with an iron fist. She held all the people of Ironforge hostage, which led the Alliance to intervene. But despite Moira being a tyrant, she was still the legitimate heir to the throne and killing her would only put the succession of Ironforge into question, thus leading to more chaos and conflict. Whereas if she lived; through her and her son all dwarven clans could unite. Varian Wrynn agreed to spare Moira's life but stipulated that if Moira was to be a leader and unite the dwarves, then she'd have to earn her crown by earning her people's respect. In order to take into account the opinions of all dwarves, Varian called for the formation of the Council of Three Hammers, to which both both Moira and her uncle Muradin will rule alongside Falstad Wildhammer as representatives of the three original dwarven clans of Ironforge. Despite their varying backgrounds and ideological differences, the three representatives have pledged to rule united for the good of Ironforge.