From Wowpedia
(Redirected from Bronzebeard dwarf)
Jump to: navigation, search

The Bronzebeard clan is preeminent among the various Ironforge dwarf clans of Khaz Modan (to the point that Ironforge dwarves are also known as the Bronzebeard dwarves[1] and simply Bronzebeards).[2] During the War of the Three Hammers, they led the dwarves of Ironforge against Thaurissan and the Dark Iron clan. Today, Muradin Bronzebeard heads[3] and represents the clan, following the petrification of his elder brother, King Magni.

The Bronzebeard clan of dwarves rules over the various clans in Ironforge and the surrounding mountains of Khaz Modan after Madoran Bronzebeard took control following the War of the Three Hammers.

The stoic dwarves of Ironforge are an ancient race of robust humanoids who live beneath the snow-capped mountains of Khaz Modan. The dwarves under their command have always been fast allies with the Humans, and they revel in the prospects of battle and storytelling alike.

The hardy dwarves of Khaz Modan lived in peace for many long centuries. Long ago, the Bronzebeard clan was small. It was under Aegrim Bronzebeard that the clan began to flourish and command respect.[4]

Roughly 230 years ago dwarven society grew too large within the confines of their mountain cities. Though the mighty High King, Modimus Anvilmar, ruled over all dwarves with justice and wisdom, three powerful factions had arisen amongst the dwarven society. The Bronzebeard clan, ruled by Thane Madoran Bronzebeard, held close ties to the High King and stood as the traditional defenders of Ironforge Mountain. The Wildhammer clan, ruled by Thane Khardros Wildhammer, inhabited the foothills and crags around the base of the mountain and sought to gain more control within the city. The third faction, the Dark Iron clan, was ruled by the Sorcerer-Thane Thaurissan. The Dark Irons hid within the deepest shadows under the mountain and plotted against both their Bronzebeard and the Wildhammer cousins.

For a time the three factions kept a tenuous peace, but tensions erupted when High King Anvilmar passed away from old age. The three ruling clans went to war for control of Ironforge itself. The dwarf civil war raged under the earth for many years. Eventually, the Bronzebeards, who had the largest standing army, banished the Dark Irons and Wildhammers from under the mountain.

Humiliated and enraged by their defeat, the Dark Iron Clan vowed revenge against Ironforge. Leading his people far to the south, Thaurissan founded a city (which he named after himself) within the beautiful Redridge Mountains. Prosperity and the passing of years did little to ease the Dark Iron's rancor toward their cousins. Thaurissan and his sorceress wife, Modgud, launched a two-pronged assault against both Ironforge and the Wildhammer capital of Grim Batol. The Dark Irons were intent on claiming all of Khaz Modan for their own.

The Dark Iron armies smashed against their cousins' strongholds and very nearly took both kingdoms. However, Madoran Bronzebeard ultimately led his clan to a decisive victory over Thaurissan's sorcerous army. Thaurissan and his servants fled back to the safety of their city, unaware of the events transpiring at Grim Batol, where Modgud's army would fare no better against Khardros and his Wildhammer warriors.

The Bronzebeards have ruled the dwarves of Khaz Modan since the conclusion of the War of the Three Hammers some two centuries ago. They encountered the humans, perhaps their most important allies, ca. 1800 years before the First War and at the same time the high elves as the elves and humans were already allies.[5] Gilneas and Alterac, strong supporters of Strom and the Arathor Empire, had developed mighty armies that explored the mountainous southern lands of Khaz Modan. It was during this period that humans first met the ancient race of dwarves and traveled to their cavernous subterranean city of Ironforge. The humans and dwarves shared many secrets of metal-smithing and engineering and discovered a common love for battle and storytelling.[6] In general the Bronzebeard reign has been prosperous: they reestablished friendly relations with the Wildhammer, restored the ancient city of Ironforge, oversaw the construction of the Thandol Span bridges,[7] and became allies with the gnomes of Gnomeregan.

When the Orcish Horde invaded Azeroth, Ironforge's dwarves offered to join the Grand Alliance. Led by King Magni Bronzebeard, the dwarves of Ironforge endured years of a bloody siege, while those that fought directly in Lordaeron offered their smithing and engineering skills to their allies, providing cannons,[8] demolition experts and skilled blacksmiths.[9] Ever since that time, Ironforge's dwarves have remained an invaluable part of the Alliance.

Apart from reveling in the prospect of battle, the dwarves have long been interested in uncovering the truth of their enchanted past. Due to the efforts of dwarven archeologists scattered throughout the world, much has been learned about the race's origins and the curse of flesh that afflicted the earthen. Many mysteries still remain, however, and the dwarves have continued excavating Azeroth’s ancient sites for answers.

Yet these are troubled times, and since the coming of the Horde, even the Bronzebeards have been beset by their own share of tragedy. Near the conclusion of the Second War, King Magni's younger brother, Muradin Bronzebeard, was presumed dead after Prince Arthas Menethil claimed Frostmourne. After the War against the Lich King, the Lich King was defeated and Muradin returned to his homeland as a veteran of the war. A new obstacle arrives, however, when it's discovered that their king, Magni Bronzebeard, was cursed with petrification during the Shattering. Moira Bronzebeard, the estranged daughter of Magni and wife of Dagran Thaurissan, takes over Ironforge and establishes a tyrannical reign. Her reign was short-lived, however, as she was later subdued by Varian Wrynn and SI:7 agents. After sparing the daughter of Magni, Varian proclaims that Moira and Muradin will rule with Falstad Wildhammer in the Council of Three Hammers in order to prevent further political turmoil.

The kings of the High Seat have gone through many scepters during their reigns. By tradition, the king would let certain of his top advisors and allies bear the scepter for a single day. These were rough days for the scepters, which saw the insides of taverns, were dropped off mountaintops, were used to smite troggs and so on.[10] 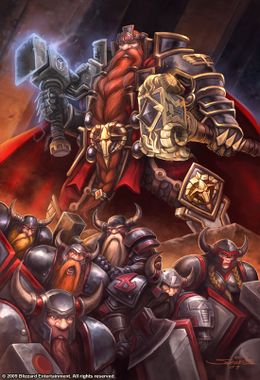 The Bronzebeard dwarves (a.k.a. Clan Bronzbeard)[11] are described as mountain dwarves.[12]

The dwarves evolved from the earthen and inhabited Ironforge. It was ruled by High King Modimus Anvilmar whose ties were closest to the Bronzebeard clan by blood and history.[13]

Ironforge dwarves, Wildhammer dwarves and Dark Iron dwarves were once the same people. The problems arose when the grand city of Ironforge became overpopulated. King Anvilmar, tried to keep the peace. Eventually, of their own volition, the clans ended up living in different areas. The Bronzebeard clan remained within Ironforge, while the Wildhammer clan lived outside the city and the Dark Iron clan to dwelt beneath it. However, all the clans desired control of Ironforge. Once King Anvilmar died, the peace broke apart and the War of the Three Hammers was fought. Although tensions between the Ironforge and Wildhammer clans had been palpable since the civil war, the aid of Ironforge during the battle at Grim Batol did much to heal the relationship between the two clans.[14]

A short civil war erupted, and the Bronzebeard clan trumped. Intolerant of the other clans' indiscretions, they exiled them. The Bronzebeard clan took up their new home under the mountain of Grim Batol, while the Dark Iron clan moved south to the Redridge Mountains. Some of the dwarves left to join the other two clans and changed their names, such as Rumholt Thunderaxe's two ancestors who joined the Dark Iron clan and took on the surname "Pikesplitter".

The Dark Iron clan eventually turned on the other two, invading their cities simultaneously. Repelled strongly in Ironforge and just barely in Grim Batol, the Dark Iron army retreated back into the Redridge Mountains. Much of all three of the clans' armies were destroyed when the Dark Irons released Ragnaros the Fire Lord.[15] Nowadays, the mighty Bronzebeards rule Dun Morogh, homeland of the Ironforge dwarves.[11]