For the mob see, see Brood of Nozdormu (drake).

“The descendants of the Bronze Dragonflight are the guardians of time and care little for the mortal races.”

Brood of Nozdormu is a faction consisting of the bronze dragonflight. Prior to Patch 4.0, their leader Anachronos could be found outside the Caverns of Time, though now he is located in the heart of the caverns. Many of its agents fly in the sky of Silithus. Reputation with the brood was a necessary part of the long quest line to open the Gates of Ahn'Qiraj, though this event was removed from all realms by Patch 3.2.0 and all associated quests removed by Patch 4.0. This reputation is also relevant for the 40-man Ahn'Qiraj dungeon in order to obtain epic quest gear and rings.

In the lives of most mortals, time is nothing more but a simple hourglass, its sands quietly trickling away. Only few ever realize that in truth, time rages like a storm, untamed and chaotic. When the Titans first descended on Azeroth, vanquishing the Old Gods and bringing order to the world, the Highfather of the Pantheon himself empowered the great dragon Nozdormu with some of his own cosmic powers, enabling the dragon to guard time itself and police the ever-spinning pathways of fate and destiny. And so, the stoic, honorable Nozdormu became known as the Timeless One. Ever since then, Nozdormu's Brood has guarded the timestream from all who would seek to disrupt its flow, guided by the Timeless One's wise, all-knowing counsel.

Now, the bronze dragon Anachronos has returned outside the Caverns of Time in the Tanaris desert, the Bronze Dragonflight's home and province. Events have been set in motion that will shape the future of all of Azeroth, as the attention of the Brood of Nozdormu is focused on Ahn'Qiraj, the fortress city of the Qiraji. It is there that those who are brave enough to heed the dragon's call should travel. A terrible darkness is building up beyond the Scarab Wall, enough to give pause even to the Timeless One himself. The dragons are rallying their champions to descend into the nightmarish hives beneath Ahn'Qiraj and to finish what they have begun. 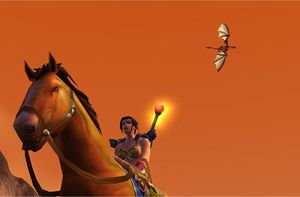 Brood of Nozdormu can be seen in the skies of Silithus.

Players begin at 0/36000 hated, the lowest level of reputation possible.

Brood of Nozdormu reputation can be earned through killing bosses in both Ahn'Qiraj instances, killing monsters inside Temple of Ahn'Qiraj, and doing quests related to the dungeons.

Killing AQ40 trash can only get you to 2999/3000 neutral, at which point reputation can only be further advanced through quests and handing in [Qiraji Lord's Insignias] which bosses in the Temple of Ahn'Qiraj will drop and [Ancient Qiraji Artifacts]. (You may want to save all the insignias until after you are neutral, since at that point gaining reputation becomes much more difficult.)

Several quests are available from items found within Ahn'Qiraj, that will provide additional Brood of Nozdormu reputation.

Quests with Anachronos in Caverns of Time also award Brood of Nozdormu reputation:

A 5-piece set for each original class is available, requiring tokens dropped by bosses in Temple of Ahn'Qiraj and neutral to honored reputation with Brood of Nozdormu.
The quests for submitting the tokens and receiving the new armor piece each award 500 Brood of Nozdormu reputation, and are repeatable.