From Wowpedia
(Redirected from Broodlord)
Jump to: navigation, search

Broodlord Lashlayer is another boss in a long line of interesting and dynamic boss fights. Though more straight forward than Razorgore and less touchy than Vael, Broodlord is still a very chaotic and engaging encounter. Though the actual fight with the Broodlord can and should be relatively free of adds, the entire encounter begins long before you ever lay eyes on him. 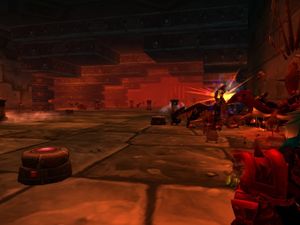 The first room contains two groups of dragonkin, which we call a Death Talon pack. Once the Death Talon packs have been cleared, your path leads up some stairs and to a pair of interconnected Suppression Rooms.

Much of the challenge in the Broodlord encounter is embodied by the two mob-infested "suppression" rooms that must be traversed before the fight actually begins. Each room is littered with suppression traps, which must be disarmed. Guarding the traps are a colorful galaxy of non-elite dragon whelps that must be AoE'd down by mages and warlocks, which respawn after 30 seconds. Both rooms also have their own sets of patrolling elite humanoids and Death Talon Hatchers, which respawn on a 20 minute timer. When the suppression traps are up, they radiate an aura that reduces movement speed, attack speed, and casting speed, to 20%.

Rogues in this portion of the encounter should be doing nothing but disarming traps. Their job is to remain in stealth and move around disarming traps so that the raid can pass through unhindered. Distract should be used as much as possible to prevent the mobs from detecting the rogues' stealth. Disarmed traps pop back up after what seems to be a random amount of time. If this is the case with a trap that the raid is near, it must be guarded and disarmed again until it is safe to leave. Please note also that from the moment a trap pops back up, it takes a second until it may be disarmed again. This process takes just long enough that the trap can release a suppression aura before it is disarmed.

Also important is keeping mages and warlocks alive to keep the dragon whelps under control. Hunters will be the main source of DPS against elites as caster mana must focused on killing whelps. Mages should have

[Mage Armor] active to allow some regeneration of mana during their AoEs, and should drop to wandshots when their mana is low. It is also a good idea to make sure mages have different types of wand damage as each color whelp is resistant to different types of magic.

The first suppression room is naturally the easiest, as elites can be pulled out of the suppression traps and effectively tanked in a spot that isn't being hit with periodic suppression auras. Packs should be pulled so that there is only one dragonkin left. At this point, the raid must move itself to the far southwest corner of the room, with everyone positioned so that only the nearby pack of whelps aggroes when they respawn. The time between respawns is when mages and healers can stop to regen their mana/health as well as res any fallen players who would otherwise simply be left behind.

After the last dragonkin is pulled and killed, the raid moves into the hallway that connects the two suppression rooms. From this spot, the raid must destroy more groups of elites until it is safe to move into the southeast corner of the final suppression room. From here, the remaining elites are cleared and the raid moves into one of the cubby holes to prepare to pull Broodlord. Casters should drink whenever possible and healers should attempt to resurrect anyone that dies whenever they have time.

The encounter with Broodlord, like all encounters in the instance, seems to have several ways it can be accomplished. Positioning is key, as is how fast your groups elects to dish out the punishment. Broodlord has four main attacks that you are going to need to deal with. Where your party decides to tank him and where your "camp" is positioned is very important due to his abilities and due to the rigors of the environment (unavoidable suppression traps and repopping dragonlings.)

The Suppression Devices no longer require a rogue's

[Disarm Trap] to deactivate (even though the tooltip still suggests otherwise), so players of all classes can work their way through the gauntlet. Stick to one side of the room (likely the left side) and start walking (slowly) to the far end of the room and the stairs. Click on suppression devices if they're close, but it's mostly not worth the effort as they'll reactivate soon enough. Use whatever instant attacks are available to ignore the attack speed and casting speed debuffs.

Upstairs, again stick to one side of the room, careful to not fall off the ledge to the lower room, and get to the Broodlord. Fight him next to the gate away from the suppression devices.

Aggro
None of your kind should be here. You've doomed only yourselves!
When pulling Lashlayer out of the Suppression Rooms
Clever, mortals. But I am not so easily lured away from my sanctum.