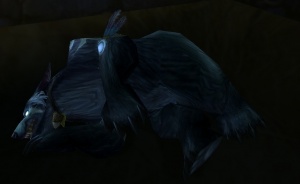 Brother Ravenoak is a level 29 elite rare mob night elf originally found at the bottom of the Talon Den atop Stonetalon Peak. He was a Cenarion druid who, together with his bretheren, guarded several powerful items inside the den. He was originally found sleeping in one of the inner rooms of Talon Den. He was almost always in Bear form, even while asleep.

Before the Cataclysm, he was friendly to Alliance players, and hostile to Horde players. Since then, he has woken up and is now found in front of the Stonetalon Peak moonwell. He has become hostile to both factions alike, most probably due to the corrupting influence of the tendrils that have emerged in the area.