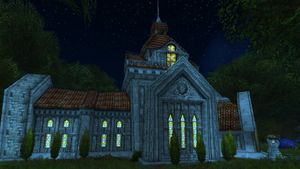 The Clerics of Northshire helped the army of their kingdom fight through its life. They were known to have also healed gnolls during the Gnoll War and jungle trolls during the Gurubashi War.[2]

A Stormwind citizen described them as:

These are the holy men of our kingdom. Their spiritual leadership keeps both the people and the troops of Azeroth focused upon our mission of everlasting peace. Their ability to channel the spirit of humanity through their bodies makes them truly wondrous, and stories of their ability to heal the sick and injured, as well as being able to affect the perceptions of others, are miraculous in nature. The transgressions against Humanity by the Orcs have forced them to devise ways to defend themselves, but their true path remains the healing of men's souls.[3]

Once the First war had begun, the clerics from the Brotherhood of Northshire risked their lives to heal soldiers wounded in combat. In the past the clerics were known to heal wounded gnolls and trolls, which had even granted them safety on the battlefield in some cases. This was not the case with the orcs, who ruthlessly targetted every cleric they found after learning of their abilities. Many clerics died without armor or weapons, but they never hesitated from joining battle, making their bravery legendary among Stormwind's forces.[4]

Prior to or during the First War, the clerics asked for the retrieval of the Tome of Divinity, a book of great value to them. Anduin Lothar undertook the quest, a task which all but killed him. He eventually returned the sacred writings before taking back the mantle of leading the armies of Stormwind into battle against the Horde.[5]

Following the invasion of the Horde which triggered the First War, the Abbot of Northshire Abbey led the clerics into battle to aid the people of the kingdom. The clerics, although brave and adept in both the healing and the destructive powers of the Light, were unprepared for the dangers of war, and suffered heavy losses.

Following the end of the First War in orcish victory, this prompted the Archbishop of the Church of the Holy Light, Alonsus Faol, along with his apprentice, Uther Lightbringer, to found the paladin Order of the Silver Hand. The paladins, while still possessing spirit of the clerics who preceded them, were also mighty knights talented in the arts of war. The Order of the Silver Hand greatly helped the Alliance of Lordaeron to overcome the Horde's might during the Second War.

Another legacy of the Holy Order was the Invisibility spell, as sacred tomes rescued from the debris of Northshire Abbey were later used by the mages of Dalaran to learn it.[6]

After the end of the Second War, Archbishop Faol raised vast funds to rebuild Stormwind City. He also helped the creation of a new clerical order, comprised of clerics, priests and paladins, which was dubbed the Brotherhood of Northshire.[7] Some of the Brotherhood are presumed to recruit and train new adventurers in Northshire Abbey and also act as the Abbey's caretakers.[8] Others may be copying books to add to the Abbey's library.[9]

In Warcraft: Orcs and Humans, the Clerics of Northshire are described as believing in "God", "angels", "daemons", "Hell", and "Heaven".[10] This is continued through into Warcraft II, with references to "God", "angels", and "heaven".[11] A reference to "God" is also in the church building's sound in the game, "Deo Gratias" (Deo Gratias), Latin for "Thanks [be] to God", which is a traditional cathedral hymn, fitting the image of holy paladins in the game.

The traditional view of Hell and God is also alluded to in the novels as well; for example in Day of the Dragon several of the paladins describe things by using religiously colored terms;

"A paladin had indicated to Rhonin that he believed that, after death, the mage's soul would condemned to the same pit of darkness shared by the mythical demons of old. This no matter how pure Rhonin's soul might have been otherwise."[12]...a damned soul...devilish kind...[13]

...clearly it was chosen by a higher power that your paths would lead you to us.[14]

...sent to the underworld where they belong.[16]

The religious structure and practices also keep in time with typical European medieval and even some modern Catholic structures and thought, such as the places of worship being called chapels, churches, abbeys, monasteries, and cathedrals.

Also typical Christian and Catholic clergy names are employed, even up to World of Warcraft, such as some male priests being called "Father" and "Brother" and prelature ranks such as Abbot, Bishop ,and Archbishop.

Like the practice of the Catholic Pope, archbishops take on a special name when they take office. Like Jarl, becoming Archbishop Benedictus.

Also, in the original Warcraft and Day of the Dragon something similar to the practice of Confession is described, as mentioned in the description for the cleric's invisibility cast (as a tool to make the confessing of secrets that weighed heavily upon the souls of worshippers easier to speak) as quoted from the guide, and in Day of the Dragon when Rhonin is asked to confess his sins to bring peace to his damned soul.

All this could just be ascribed the developers and writers trying to make the stories seem more "Medieval" with no real implications to actual religion implied. It does seem that in later versions of Warcraft the developers avoided most references to anything that could be tied to any actual religious practice, and made the "Light" ambiguous in nature, so one could not really label it as being a parody or impersonation of any particular religion. In World of Warcraft and later games, followers of the Holy Light are described as following the Holy Light and no reference to "God" is found. In Warcraft III, however, "angels" appear during the Resurrection spell, and "angels" are still alluded to in World of Warcraft.

According to older accounts, the aged Alonsus Faol was the Abbot of Northshire Abbey himself and fled with the surviving citizens of Stormwind to Lordaeron.[17][18] Later sources changes his story to already being in Lordaeron during the First War, and only learned about the destruction of Northshire Abbey when he spoke with Lord Lothar in Lordaeron's Capital City.[19]