From Wowpedia
(Redirected from Brothers in Blood)
Jump to: navigation, search

Brothers in Blood is Chapter 5 of the Night Elf campaign, Eternity's End.

The next morning, within the subterranean Barrow Deeps of Mount Hyjal... 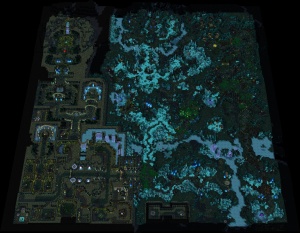 Tyrande Whisperwind and Furion Stormrage entered the Barrow Deeps and began looking for the Druids of the Claw. They came across a Furbolg Shaman, the same one whom Tyrande had helped before. The other furblogs informed them that their shaman had been bitten by a spider and had become gravely ill. There was a healing well nearby, but the shaman was too sick to make the journey. They gave them an empty vial, telling them to fill it with waters from the nearby well. After dispatching several lizards around the well, they filled the vial and returned to the furblogs. The shaman was healed by the water and thanked Tyrande with a Talisman of the Wild.

Soon the party reached the gate of the prison of Illidan Stormrage. Tyrande believed that they should free Illidan as he would prove useful against the Burning Legion, but Furion thought otherwise. The two argued briefly, but Tyrande took her Sentinels with her into the prison.

Furion was unable to open the gate, forcing him to continue his search for the Druids of the Claw. Along the way, he encountered more hostile creatures, including remnants of Deathwing's Black Dragonflight. After dispatching the Black Dragonflight, they found the druids. However, they had become feral. Not wanting to kill their brethren, Furion and his soldiers safely dispatched them with little or no harm. They eventually managed to reach the center and awaken the Druids from their Slumber. Their leader apologizes for their aggression, but nonetheless insists that they are ready for their fight against the Burning Legion.

Meanwhile Tyrande and her Sentinels managed to rescue some Night Elf prisoners to bolster their forces and open a main gate. Maiev, leader of the Watchers and her lieutenant Naisha were not present during Tyrande's assault on the prison. After almost reaching Illidans prison, she encounterd Treants, meaning that a powerful Keeper of the Grove was nearby. Tyrande then managed to slay the Keeper of the Grove, Califax and free Illidan who is overjoyed to hear her voice for the first time in ten thousand years.

Furion was not happy that Illidan is free, but Illidan pledges to help destroy the Burning Legion because of love for Tyrande. Illidan is, nonetheless, unrepentant for his crimes against the night elves ten thousand years ago.

The Druids of the Claw have been asleep in the depths of these caverns for thousands of years. They must be found and awakened if the darkness spreading aboveground is to be defeated.

Though Illidan's release could prove costly, his aid against the Demons would be invaluable. You must plumb the depths of his ancient prison and release him before all is lost.

The Furbolg Shaman has fallen ill with a terrible disease. His only hope lies in an uncorrupted font of healing waters. Using the special vial the Furbolgs have given you, retrieve some of the sacred water and return it to the ailing Shaman.

Furion Stormrage: "These Barrow Deeps have remained untouched for nearly three thousand years. Still, there is no telling what creatures may have taken up residence after we sealed these tunnels shut."

Tyrande Whisperwind: "There is nothing to fear in this place. The only enemy that has ever given me pause is now corrupting the lands above us. Let us be done with this business and get back to the surface."

Furion Stormrage: "Agreed. Just be careful. There is no telling how the druids of the claw will react to us after all this time."

Tyrande Whisperwind: "I sense a strange darkness tainting them. They have been transformed by a great evil."
The party ventures further into the caverns.

Tyrande Whisperwind: "Demon bile! This must be what cursed the spiders."

Furion Stormrage: "If the corruption can do this to these simple creatures, I dare not imagine what it could do to the beasts who live above!"

Tyrande Whisperwind: "We must put an end to this corruption, no matter the cost!"
The party encounters a group of furbolgs.

Furbolg Chieftain: "Hold, Priestess! We need your help! Our shaman was bitten by a strange spider and has become deathly ill. Our tribesmen have run off, leaving us to fend for ourselves."

Tyrande: "What would you have us do?"

Furbolg Chieftain: "The waters of the nearby fountain of life can save him, but we dare not leave him in this state. If you can fill this vial with its waters and return it to us, our shaman's life will be saved."

Tyrande Whisperwind: "If his wisdom will prevent you from turning feral like your tribesmen, I will gladly save your shaman."
The party finds the fountain.

Tyrande Whisperwind: "This must be the fountain of life. I need only place the vial in the fountain's waters."
The party returns to the furbolg.

Furbolg Chieftain: "Elune be praised, Priestess. Truthfully, we doubted that you'd return. Now, our shaman has a chance."
The chieftain administers the waters to the shaman, who is revived.

Furbolg Shaman: "Again, I must thank you for your help. Take this talisman. Should you require our aid, it will summon us to fight by your side."
The party finds a large door.

Tyrande Whisperwind: "The pathway cuts off to the south, but this doorway looks promising."

Furion Stormrage: "Oh, no. How could I have forgotten?"

Tyrande Whisperwind: "What is behind this door that worries you, my love?"

Furion Stormrage: "This door leads to Illidan's prison, Tyrande. We should go... now!"

Tyrande Whisperwind: "Illidan? It's been ten thousand years! Could he still be alive? We should free him, Furion! He would be the perfect ally against the undead and their demon masters!"

Furion Stormrage: "No, Tyrande! That beast must never be set free!"

Tyrande Whisperwind: "But he is your brother!"

Furion Stormrage: "Be that as it may, he is far too... dangerous. I forbid it."

Tyrande Whisperwind: "Only the goddess may forbid me anything. I will free Illidan whether you like it or not."
Tyrande enters Illidan's prison, while Furion continues searching for the druids, eventually reaching an underground river.

Furion Stormrage: "My powers cannot open the door! Though it grieves me to leave her. I must press on."

Furion Stormrage: "Let me pass! The Arch-Druid of the Moonglade demands passage!"
A spectral bridge appears over the river.

Elder Watcher: "Turn back! You are unworthy to bask in the bear gods' presence!"

Furion Stormrage: "Bear gods? Perhaps the creature was referring to the sleeping druids of the claw. But why would he call them bear gods, when they appear as I do?"
Furion encounters a pack of black dragon whelps.

Furion Stormrage: "Foul spawn of Deathwing! I should have known that you loathsome wretches would take refuge within the flames of the earth!"
Furion locates the druids of the claw.

Furion Stormrage: "What in... They have lost themselves to their animal aspects! They are mindless and feral!"

Druid of the Talon: "In the raven's name!"
The druids of the talon summon cyclones to incapacitate the feral druids.

Furion Stormrage: "The horn's call might work, but it would reach only a few of them in this part of the cavern."
Furion heads deeper into the cavern and blows the Horn of Cenarius. The druids of the claw revert to their night elf forms and gather around Furion.

Druid of the Claw: "Shan'do Stormrage! I don't know what came over us. It's been so long since we remembered who we were."

Furion Stormrage: "All is well, thero-shan. I have need of you and your mighty brethren once again. After these many ages, the Burning Legion has returned, and only our combined strength can drive them back."

Druid of the Claw: "Then we druids of the claw are yours to command, Shan'do Stormrage."
Meanwhile, Tyrande has entered Illidan's prison.

Tyrande Whisperwind: "I cannot go back. Goddess grant that Furion was wrong."

Elder Watcher: "Your quest is foolhardy! Even your goddess has condemned the one you seek to free!"
Tyrande fights her way through the Watchers guarding Illidan's prison.

Tyrande Whisperwind: "A cache of the Watchers' weapons! These should help us considerably!"

Watcher: "Death to the intruders!"

Tyrande Whisperwind: "The treants move to block my path! Only a powerful druid could command such creatures!"
Tyrande continues through the prison.

Tyrande Whisperwind: "These explosive devices look to be of goblin design. The wily creatures must have hidden them here long ago. No matter, I'll make good use of them."
Tyrande makes her way even deeper into the prison.

Tyrande Whisperwind: "These explosive devices look to be of goblin design. The wily creatures must have hidden them here long ago. No matter, I'll make good use of them."

Keeper of the Grove: "Hold, Priestess! This place is forbidden, even to one such as you. There is a terrible evil here that must remain chained beneath the earth."

Tyrande Whisperwind: "Illidan was considered a great hero once. I believe he will become one once again."

Keeper of the Grove: "Madness! You would doom us all by freeing the Betrayer!"

Tyrande Whisperwind: "Illidan! Is that you?"

Illidan Stormrage: "Tyrande... it is your voice! After all these ages spent in darkness, your voice is like the pure light of the moon upon my mind."

Tyrande Whisperwind: "The Legion has returned, Illidan. Your people have need of you once more."
Illidan breaks free from his cell.

Illidan Stormrage: "Because I once cared for you, Tyrande, I will hunt down the demons. But I will never owe our people anything!"

Tyrande Whisperwind: "Then let us hurry back to the surface! The demons' corruption spreads with every second we waste!"
Tyrande and Illidan exit the prison and come face-to-face with Furion and the druids of the claw.

Illidan Stormrage: "It has been an eternity, brother. An eternity spent in darkness!"

Furion Stormrage: "Illidan! You were sentenced to pay for your sins, nothing more!"

Illidan Stormrage: "And who were you to judge me? We fought the demons side by side, if you recall!"

Tyrande Whisperwind: "Enough of this, both of you! What is done is done! My love, with Illidan's help, we will drive the demons back once again and save what is left of our beloved land!"

Furion Stormrage: "Have you even considered the cost, Tyrande? This betrayer's aid may doom us all before the end. I will have nothing to do with this."