"I accept that I might die in battle - a glorious fate for an orc, shaman - but I am filled with dishonor for seeking it at the possible cost of those who fight against evil for their lives and those of others."

Broxigar (a.k.a Broxigar the Red, Broxigar the Red Axe, or simply Brox) was a veteran orc warrior whose comrades were slaughtered in battle and who sought his own death in battle because of his guilt. Sent back in time to the War of the Ancients, Brox became an important figure in the war, and was chronologically the first orc ever encountered on Azeroth in the new altered timeline. At the final battle of the war, Broxigar leapt through the portal opening in the collapsing Well of Eternity and died in a blaze of glory after having become one of the only known mortals to ever inflict a wound on Sargeras himself.

He was the older brother of Varok Saurfang.

Broxigar was born on Draenor as a member of the Blackrock clan and the older brother of Varok.[2] Broxigar and Varok also had an unnamed half brother, sharing the same mother but different fathers.[3][4] Brox grew up alongside his friend Garno, who was practically like a brother to him.[5]

Brox was a veteran of the First, Second, and Third Wars — well-known among his people for his heroic actions in helping to hold a vital mountain pass against hordes of demons during the Third War. Of all of his comrades, Brox was the only one left alive when orcish reinforcements finally arrived on the battlefield. Though he was greatly honored by his people, Brox never forgave himself for his "cowardice" in surviving while all of his comrades died a noble, glorious death. Even his niece Thura, who was just a child at the time, could sense the guilt he felt upon his return to his family.[6]

When the Horde shamans detected the temporal anomaly in the Stonetalon Mountains, Brox and a younger warrior were sent to investigate. Brox's companion, Gaskal, was killed and Brox himself was thrown ten thousand years into the past along with a human, and a dragon.

Among the night elves

In due course, Brox was captured by the Moon Guard and brought to Suramar for safekeeping. Though the night elves treated him like an animal, the novice priestess Tyrande Whisperwind was kind to him, giving him food and healing his injuries. Brox called her "shaman", believing that the powers of healing she used were granted to her by the spirits.

Brox was eventually freed by Tyrande who had meanwhile teamed up with two other time-travelers, the dragon-mage Krasus and his former pupil, the human mage Rhonin. Brox stood guard over the comatose Malfurion Stormrage as the latter destroyed a Highborne spell disrupting the Well of Eternity.

Brox's fighting skills earned him a fair reputation among the Kaldorei Resistance. Though typically xenophobic, the night elves accepted him (although the presence of the dragon Korialstrasz may have influenced that somewhat).

When Brox's axe was taken by the Moon Guards that captured him, Malfurion, under the forest demigod Cenarius' direction, created a mystical axe of wood enchanted with a piece of Kalimdor's magic, making it light as a feather and stronger than any mortal-forged axe. In Brox's hands, it was to be the death of literally thousands of demons and allowed him to achieve the unthinkable against their lord.

A blaze of glory 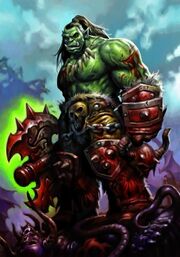 At the final battle over the Well of Eternity, Brox realized that if the world and the future were to be saved, his companions needed more time. Brox leapt from the back of one of the red dragons also carrying Rhonin into the swirling portal that was opening at the bottom of the funnel. When he passed through, and arrived on Argus, homeworld of the Burning Legion,[7] he proceeded to slaughter multitudes of demons, blocking their advance towards the portal, slaying so many that he ended up standing atop a mountain of their corpses — mocking more to come challenge him. It was there that he eventually attracted the attention of Sargeras, who came personally to put an end to the orc's life. However, Brox did the impossible, and with the Axe of Cenarius struck a small wound in Sargeras' leg. This wound would later be the focus of Krasus and his allies' spellwork, that for a second, tore Sargeras' attention away from his struggle to keep the portal open... allowing Malfurion and Illidan to close it upon him. Brox's life was ended by Sargeras, right before the demon entered the portal, by the jagged edge of Sargeras's broken sword, and Krasus saw Brox's lifeless corpse impaled on its end. With this final act of loyalty, Broxigar the Red sealed his place in history as one of the only known mortals to have ever assaulted the Burning Legion's leader.

Broxigar the Red died, not a mere honorable death, but was graced with an unimaginable glory never being heard of in the history of the orcs. In the afterlife, he finally reunited with his deceased comrades in the past.

Against all odds, Rhonin found Brox's Axe of Cenarius after the battle, having not been lost with his death on the other side of the Well, and washed up on the shore of the new Kalimdor. When Krasus returned to the present day, his first act was to take the Axe directly to Thrall. Disguised as an orc shaman, Krasus told his tale of how Brox helped stop another demon invasion, and implored the Warchief to sing songs of Broxigar the Red, his legendary life, and his glorious sacrifice.

The night elves raised up a statue to him, making him the only orc to have ever been given homage by them. Tyrande and Malfurion honored him after the war and even after all these millennia, the mere mention of Brox's name is enough to remind Tyrande of how they lost him, causing tears to well up in her eyes.[8]

Now his brother, Varok Saurfang, High Overlord of the Kor'kron holds his name in honor.

In time, Thura grew up to warrior age and after proving her skills, Thrall gave her the Axe of Cenarius, of which Thrall's most trusted shaman had seen in a dream that it should go to her. She felt honored to wield such a fabled weapon. False dreams of Brox were sent to Thura of him being betrayed and killed by Malfurion himself, as part of a larger plan to free himself from the Emerald Nightmare.[6]

During the trial of Garrosh Hellscream, Tyrande referred to Broxigar as "one of the great heroes of Azeroth".

Shrine of the Great Warrior.

The Krokul of Argus witnessed Broxigar's arrival and his last stand against Sargeras. They didn't know his name or the new world he'd come through the portal from, but his single blow on the Dark Titan "was never forgotten." They managed to retrieve his necklace, a boot, and a shoulder pad, and dubbing Brox "the Great Warrior", erected the Shrine of the Great Warrior using his mementos in Krokul Hovel.

Broxigar appears at Black Rook Hold in a flashback to the War of the Ancients. When Brox is fighting off demons on a bridge in the hold alone, Illidan Stormrage and Jarod Shadowsong aid him by closing the portals they are coming through. The three then battle Malvingeroth together.[9][10]

Broxigar on the cover of The Demon Soul.

Brox: (After nearly beheading Varo'then) "Second rule! Only fools talk so much on the battlefield! 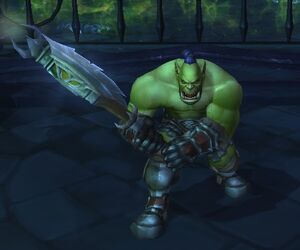 Broxigar in World of Warcraft.

If you've completed all side quests during the scenario
Rhonin says: This cannot be!
Broxigar the Red says: Such savagery...
Captain Jarod Shadowsong says: Are we no better than the monsters we fight?