Brute's Rise is a sub-zone in northeastern Ashran, on Draenor.

Inhabited by the flame-speaking Ashmaul ogres, the area features fire elementals and elite ogron, as well as throwable boulders and grappling hooks to scale down to the beach below, where Ashmaul Pearls can be looted.

One of the most well-preserved areas on Ashran, Brute's Rise features several towers in relatively good repair, as well as largely undamaged stone paving and steps leading down to tiered areas. The north of the Rise forms a rampart overlooking Ashran's northeastern beaches, from which Ashmaul archers fire arrows down upon the boats of apparent encroachers. Populated by rays, riverbeasts and Sand Snappers, the beach is littered with pearl-bearing clams.

Brute's Rise is perhaps the highest point in Ashran, with its back set against the mountains that form the zone's eastern ridge. To the west a path runs down to Emberfall Tower, while to the south the land drops sharply to where The Dark Woods nestle in the crook of the mountains.

The Rise appears to be one of the main bases of the Ashmaul, and they can be found practising their fire magics throughout the area. Summoned fire elementals escort or assist their masters in their rituals around the large bonfires that dot the zone, while herds of Wild Goregers graze in unused areas, with a few larger specimens domesticated to serve as war-boars for the ogres.

Ogre Fires! is the even that takes place in Brute's Rise.

Players must rush to claim Ogre Fires in the north-east of the zone. During the event, one of the numerous ogres in the area will become marked as the Ogre Fire, becoming claimable by a tug-of-war bar similar to bases in Eye of the Storm. Once a faction has fully claimed the fire, their score is increased by 1, and a new Ogre Fire is nominated. The first faction to claim 3 fires wins the event.

Boulder piles can be interacted with to gain a special buff allowing the player to throw targetable boulders onto nearby players and NPCs, dealing substantial damage. Each pile grants 3 boulders.

Grappling hooks can be used from Brute's Rise to scale down to the beach below, or from the beach to climb up to the Rise.

Captured Gor'vosh Stoneshapers can be found in crude cages in the area; freeing them will earn the player their gratitude, with the ogre granting them their Boulder Shield, a powerful protective barrier that constantly regenerates while out of combat, with a medium-term duration. 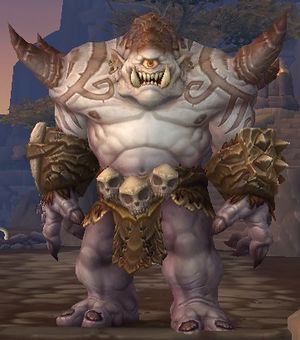 An Ogron Destructor, for once seen without a boulder in its hand

An early map of Ashran shows this area named the "Ogre Tower". During the expansion's beta, it was known as "The Tower".