Human buccaneer in World of Warcraft.

Buccaneers are pirates found on Azeroth.

Pirate buccaneers of the Bloodsail Buccaneers joined the Uncrowned during the Burning Legion's third invasion. They could be trained into duelists. 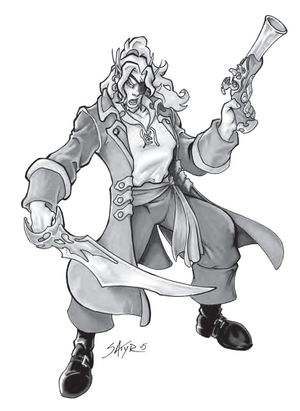 Satisfied to let the Scourge, the Burning Legion and the mortals fight for supremacy of the land, the buccaneer is the unrivaled lord of the seas. A buccaneer dominates the seas and becomes rich off the helpless ships that fall into his traps. Nursing hatred in his heart, the buccaneer shows no mercy or consideration for any. He tyrannizes Alliance and Horde ships alike, gold being the same color to him no matter the race of the victim. The buccaneer is highly skilled in sea combat, including, but not limited to, firearms and sailing. The appearance of a buccaneer ship on the horizon can make the most seasoned captain's heart grow cold with panic.

Although any race can become a buccaneer, most are human or goblin, the Bloodsail Buccaneers and the Blackwater Raiders of the South Seas being the most notorious. The most successful buccaneers are part of larger organizations; a lone ship of buccaneers is going to do little damage before being set upon by authorities - or larger pirate groups. Some buccaneers are in the employ of more respectable members of society, acting as privateers or doing dirty work against a lord's enemy's fleet; but most work for themselves.

Pirates are feared and hated by the populace, and privateers have a reputation for being almost as bad as those they hunt. The seas are already a treacherous place to be, with the Maelstrom and the naga among other dangers, and the fear of pirate fleets slows sea travel considerably. The buccaneer is proud of this notoriety, and does much to encourage it.

In an adventuring party, the buccaneer is concerned with exploration and plunder, and is useful to have along for any trips across the seas or any dealings with unsavory characters. An evil buccaneer is likely to attempt to take the party's portion of the treasure once the adventure is at an end, or leave them stranded on an island. The typical buccaneer is a soul who believes the world is his oyster, and everyone else is there to either give him things, or be in the way of him having things. Treasure, the freedom of the sea, and more treasure are his only concerns in life.

Although an unsavory lot, buccaneers do revere and respect two things (other than themselves): the sea and her lover, the wind. The buccaneer has likely seen everything that floats or swims. He can identify a ship on the horizon.

The buccaneer becomes so obsessed with treasure that his eyes can more easily spot any treasure nearby.

A buccaneer is ultimately untrustworthy, and untrustworthy people trust no one else. A pirate cannot afford to be naive. Buccaneers are skilled at fighting on the pitching and rolling decks of ships. The life of a pirate also means making sure no one sneaks up on you. When the buccaneer has reached the pinnacle of his swashbuckling skills. He is adept at moving and tumbling around to confuse his opponents and put himself in the best position to strike.[1]

Relations with other Classes

The buccaneer favors firearms over swords (although he does, of course, use swords and knives frequently), and needs the sure-footedness of sea legs. Buccaneers commonly band together with other buccaneers, rogues or warriors. Tinkers are welcome on their ships for their usefulness, but scouts are considered useless, as the buccaneer knows all he needs to about the sea. Priests and shamans are considered useful for healing spells, but buccaneers do not tolerate proselytizing. Arcane spellcasters are regarded with caution, and can be bargained with if throwing them into the sea proves a bad idea.

Although some buccaneers have used the ingenious submarines that tinkers create, the majority of buccaneers love sailing almost as much as they love their treasure. Their ships are commonly in top shape, and they commonly have a crew of slaves on board to keep the ship watertight and seaworthy. A buccaneer pays for nothing he is not forced to.[2]

Lords of the Sea