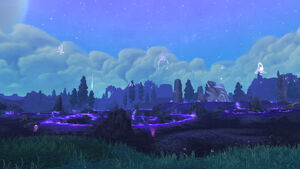 The Burial Fields are the resting place of the ancestors of the Shadowmoon clan of orcs. The Shadowmoon Void Priestesses have disturbed the spirits resting in the fields using shadow magic, causing the void-torn souls of orcish ancestors, elekk, and kaliri to wander the fields attacking outsiders. The spirit of Mother Om'ra, a chieftain of the Shadowmoon clan in life, can be fought and defeated here. The four Tribal Stones around the area reveal how the Shadowmoon clan discovered the Dark Star two centuries ago after the Genedar crashed into Draenor and subsequently forbade the use of its magic when they realized the danger is presented.

Today, a bright fire exploded across the heavens.
A great white crystal landed in the plains below our village.
We know not what it is. Is it a gift from our ancestors?

Shortly afterward, a shadow appeared in the sky beneath the pale moon. Some stare at it in fear, others in adoration.
The clan has given it many names: great father, dark mother.
The Chieftain calls it the "Dark Star."

Since the crystals fell, our power has grown in ways we do not fully understand.
We have always spoken the language of the stars and the earth. Now, we hear another - the voice of shadow.

Yesterday, we found one of our clan defiling the spirits of our ancestors.
The Chieftain is livid. It is clear - this new magic is dangerous. It leads us down a path from which we cannot return.
From this day forth, let it be known. The powers of shadow are forbidden to the clan.
The "Dark Star" is evil.