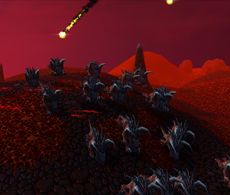 “Images of innumerable dead worlds flickered through his mind. He saw gigantic ruins, toppled buildings that had once reached the sky, lakes of glass where proud cities had once stood, endless plains of rubble. He saw the lights of life in the universe winking slowly out until only a few remained.”

— The demon hunter Vandel, witnessing the destruction left in the wake of the Burning Crusade[2]

The Burning Crusade was a vast war of destruction across the cosmos initiated by the fallen titan Sargeras, and carried out by his Burning Legion of demons. It was launched with the goal of destroying all life and razing or conquering all worlds in existence. In doing so, it would prevent their corruption by the Void and purge the universe from all potential influence of the void lords.

The conflict would span many thousands of years and would come extremely close to its final goal. After triumphing over countless worlds, the Legion's progress would be halted before its most important target, the planet of Azeroth and its world-soul.

Despite the determined efforts of Sargeras and his forces, the defenders of Azeroth turned back the Crusade on several occasions. This would culminate in an invasion of the Legion homeworld of Argus itself, and the imprisonment of Sargeras within the Seat of the Pantheon, marking the end of the Argus Campaign. With this, the Burning Crusade was brought to a decisive end, and the Legion dealt a crippling blow.[3]

Though the Burning Crusade represented a war in and of itself, its size and time span meant that it encompassed a wide variety of sub-conflicts. Some of the major theaters for these conflicts include: 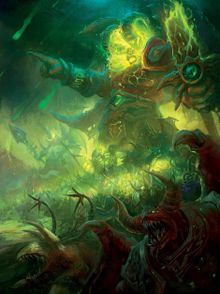 The effects of the Burning Crusade were many and far-reaching and helped shape the future of the universe as a whole. It also served as a catalyst for many unrelated events. The most important events directly caused or influenced by the Crusade include (in chronological order):

It is a great war that rages beyond the ken of normal mortals. The universe houses innumerable worlds, and the Burning Legion currently invades a handful of them. Most mortals are blind to this secret conflict, but the wisest and strongest know of it - and some are heroes and leaders in this war. Champions from Azeroth and many other worlds battle across the cosmos, attempting to drive back the Burning Legion and keep the embattled planets safe from demonic corruption. Theirs is a desperate, epic war, and they welcome any who would join them. Beings of all sorts join forces - humans and draenei fight alongside orcs, high elves alongside night elves. Old rivalries are thrown aside in the face of the ominous legion. All who fight this secret war know that despite the posturing and ambition of individual demon lords, Kil'jaeden was always Sargeras' second. He is the Legion's true leader. Out in the Great Dark Beyond, Kil'jaeden waits as demons and mortals die, biding his time for his minions to grow strong once again. With the end of the Third War, the Burning Legion's existence is no longer a secret, but now a well known fact by the populace of Azeroth.[4]