The Burning Steppes are located north of the Redridge Mountains and south of the Searing Gorge. As such, they hold the only accessible land passage from the kingdom of Stormwind in the south to Khaz Modan and Lordaeron in the north. Now virtually abandoned by Stormwind's protection, the Burning Steppes is controlled by the orcish Blackrock clan, minions of the black dragonflight, and agents of Firelord Ragnaros.

This rugged region is full of craggy foothills, scattered boulders, and wide-open ashy plains. Rivers of lava rive a charred earth landscape. Smoke from the Blackrock Mountain constantly hangs in the air, staining the sky a red hue. Blackrock Spire stands proud and defiant in the mountains as an orc stronghold from the Second War. Black dragons and Twilight's Hammer cultists under Nefarian hold the spire's upper levels, while hostile Dark Iron dwarves dwell in the depths. The Molten Span, a massive stone edifice in the north, bridges a river of fire and leads to Khaz Modan. The surrounding countryside is home to Blackrock orcs and Fire-Gut ogres, all brutal castoffs from the Second War.[1]

The Burning Steppes is populated by the orcish Blackrock clan. Deeper in the region, ogres, dragons, and the dwarven Dark Iron clan can be found. With the constant volcanic activity and flows of lava, the weather is perpetually hot and dry, and the land is absent of widespread vegetation.

The Blackrock orcs have long maintained a lasting settlement around the volcano known as Blackrock Stronghold, staying hidden from the road and always keeping watch for Alliance attacks. These orcs are more typical of the type of the First and Second wars rather than the current Horde in Kalimdor: Bloodthirsty and savage, they mine the mountains around Blackrock Spire for metals for their weapons and armor. In recent years, they have begun spreading outward, frequently terrorizing the Alliance-held region of the Redridge Mountains to the south. They have allied with the Firegut ogres on the southern end of the steppes as well as the black dragonflight in preparation for a violent territorial expansion into lands protected by Stormwind. But the Alliance – not to mention some friendly Dark Iron dwarves and certain members of the Horde – will not allow them to succeed. 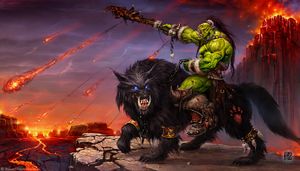 A raider in the burning steppes. 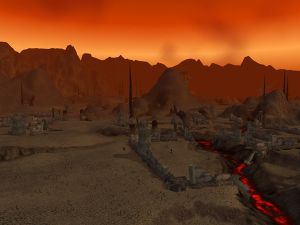 As part of the northern Redridge Mountain Range, this valley was presumably similar to it a long time ago, and it used to be controlled by the human kingdom of Stormwind. Some 200 years before the Dark Portal opened, the Dark Iron dwarves earned the region its present name in the War of the Three Hammers. The dwarves had established their new home there after their clan was exiled from Ironforge. They practiced sorcery that eventually destroyed them and the entire northern extent of the mountain range. In an effort to summon elemental minions to aid his people in a war with the Bronzebeard and Wildhammer clans, the Sorcerer-Thane Thaurissan inadvertently awoke Firelord Ragnaros, who was previously banished by the titans. The Firelord's arrival melted several mountains in this range and forged a great volcano in the blast's epicenter. The landscape has remained scarred ever since.

After the destruction, the land north of the Blackrock mountain ridge came to be known as the Searing Gorge, and to the south the Burning Steppes.

Orcs came there during the First War,[2] maintaining settlements around and within the volcano, the climate being something of their liking. After the Horde conquered Blackrock Spire they used it as a base of operations until the late days of the Second War. Warchief Orgrim Doomhammer slew the human hero Anduin Lothar by the foot of the volcano near the war's end, though Lothar's death turned the tide and spurred the Alliance on to crush the failing Horde.[3]

The orcs of the Blackrock clan later returned the region.

The area was invaded twice by the Scourge in the years leading to the war against the Lich King.[4]

The area can be reached from Searing Gorge, through the Blackrock Mountain; a passage from Redridge Mountains and a highway leading from the Swamp of Sorrows.

Lacking the grace and beauty of Khaz Modan's peaks, the Burning Steppes' mountains show the force of the energy that twisted them. The very rock melted when the volcano was formed, and lava changed the surrounding areas forever. The Blackrock Mountain is awe-inspiring in its sheer mass and the obvious devastation it's brought, while the rest of the land attempts to recover from the damage done by the summoning of the Firelord, Ragnaros, in which the mountain was birthed.

On the western end of the ridge that divides the steppes from the Searing Gorge sits the impossibly high Blackrock Mountain, an active volcano birthed over 200 years ago. The steppes are mostly under the control of the Black Dragons and their Blackrock orc allies. In the midst of the barren steppes stand the Thorium Brotherhood's town of Chiselgrip. To the north lay the Ruins of Thaurissan, the Dark Iron clan's old capital city, as well as Flame Crest, a small outpost maintained by the Horde. In the southeast, the Alliance clings to the scarred ruins of the town now known as Morgan's Vigil.

There are no instanced dungeons in the Burning Steppes themselves, but the Blackrock Mountain zone offers quite a few high-level dungeons.

Map of the Burning Steppes. 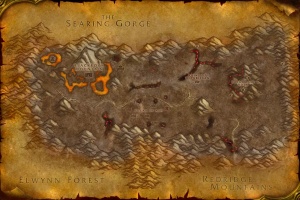 Map of the Burning Steppes prior to Cataclysm. 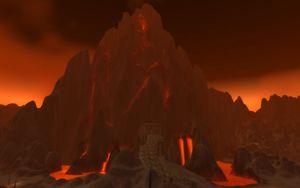 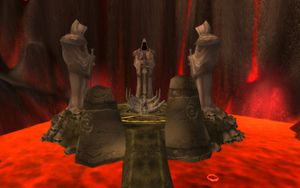 The Altar of Storms.

The main storyline deals with halting the orcish Blackrock army amassing in the steppes to storm Redridge. Adventurers start at Flamestar Post (picking up an optional breadcrumb quest from their major city or in Searing Gorge). Eventually, the quests take you to Chiselgrip and further east. 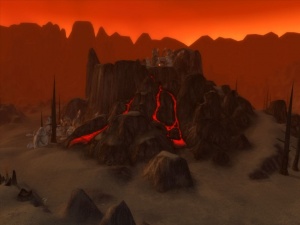 The Burning Steppes is a shattered region located between Azeroth and the dwarven home of Khaz Modan. The only accessible passage between them is through the foul Blackrock Spire volcano and the Burning Steppes. The highway is thus well traveled, but still dangerous. Passing over rugged foothills and mountains, the road is frequented by enough travelers to be safe, but beasts will sense when you leave the road and pounce on you instantly.

While many use the Burning Steppes as a thoroughfare, it is populated by one of the few successful orcish settlements in Azeroth. These orcs do not honor Thrall's truce with the Alliance, instead following the barbaric practices of the orcs from before the Third War. Yet, one cannot blame their hatred of the Alliance, as Stormwind parties hunt them frequently. If you delve deeper into the region, you can find ogres, dragons and the vicious dwarves the Dark Iron clan.[5]

Many people in Khaz Modan and Stormwind will pay adventurers to hunt the monsters in the hills, either for pelts, meat or to protect the road. Those braver or stupider may even explore the depths of Blackrock Spire.[6]

These steppes were formerly part of the Redridge Mountains before the Dark Irons came here after their exile. They established a colony called Thaurisan, but were not smart enough to keep it safe. Their thane, a mad sorcerer known as Thaurisan, summoned the fire elemental king Ragnaros to aid them in the war against the Ironforge dwarves. Ragnaros' arrival melted several mountains in this range and forged a great volcano known as Blackrock Spire in the blast's epicenter. Tales circulate of Dark Irons living as puppets to Ragnaros, who dwells under the volcano.

Orcs also came here after the Second War and maintain settlements around and within the volcano, the climate being to their liking as it seems. The Horde conquered Blackrock Spire and used it as a base of operations during the campaign against Lordaeron in the Second War. Warchief Orgrim Doomhammer slew the human hero Anduin Lothar by the foot of the volcano at the war's end, though Lothar's death turned the tide and spurred the Alliance on to crush the failing Horde.[6]

The casual (and lucky) traveler between Khaz Modan and Azeroth is unlikely to see any of the Burning Steppes' inhabitants. Still, orcs maintain a lasting settlement around the Blackrock Spire Foothills, staying hidden from the road but always keeping watch for Alliance attacks. These orcs are more typical of those during the First and Second wars. Bloodthirsty and savage, they mine the mountains around Blackrock Spire for metals with which to make weapons and armor.[5] Some of their dire wolves have seemingly escape and now inhabit the mountains north of Stormwind.[7]

The black dragons are elusive, and one who wishes to avoid getting torn apart does not approach without considerable firepower. They will attack solitary travelers for the sport of it and consider anyone approaching their usurped fortress free game.

Led by Chief Ogg'ora, the Fire-Gut ogres from the south study arcane magic, but their massive bodies still allow them to excel in combat. Give an ogre sorcerer a club and she's still likely to bash out the brains of the strongest dwarven fighter. This violent race is dedicated solely to claiming the Burning Steppes as ogre territory. The Alliance – not to mention the orcs, the Dark Iron dwarves and the dragon folk – will not let this happen, as they refuse to lose the only passage to the north.[5]

Lacking the grace and beauty of Khaz Modan's peaks, the Burning Steppes' mountains show the force of the energy that twisted them. The very rock melted when the volcano was formed, and lava changed the surrounding areas forever. The Blackrock Spire is awe-inspiring in its sheer mass and obvious devastation, while the rest of the land visibly attempts to recover from the damage done by the rebirth of the fire elemental king, Ragnaros.

With the volcanic activity and lava flow, the weather is in a perpetual state of hot and dry. This is perhaps the most arduous leg of the journey from Khaz Modan to Azeroth.[5]

North of the Burning Steppes is located the Searing Gorge and between them, there is the Blackrock Spire volcano. South of the Steppes are the Redridge Mountains.