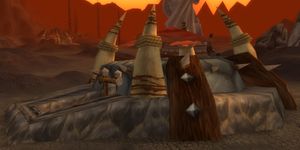 An orcish burrow in the Burning Steppes.

These structures served dual purposes: they acted not only as farms for the harvesting of various roots and crops, but also as fortified bunkers for the peon workers to hide in during times of attack. Increasing numbers of these structures provide food to support the amassing of additional troops.[3] 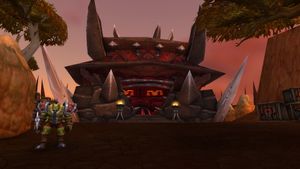 A fortified burrow at the Dranosh'ar Blockade.

Burrows can be found in Horde and orc lands in World of Warcraft, usually used as guard posts. A new fortified model was created alongside the standardized Horde architecture in Wrath of the Lich King.

The following areas have burrows: