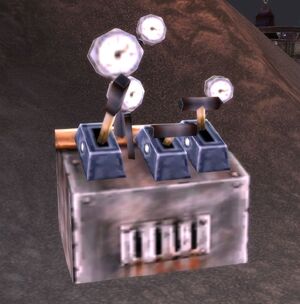 Buzzboxes are devices invented by - or at least used by - Wizbang Cranktoggle, a gnome residing in Lor'danel. They combine elements both of two-way communication devices and analysis/processing devices. They may also incorporate teleportation/transportation devices.

Prior to the Cataclysm, there were four buzzboxes, named Buzzbox 827, Buzzbox 411, Buzzbox 323, and Buzzbox 525. As the character proceeds through the quests, it becomes apparent that Wizbang is using them as exotic backyard stills.

After the cataclysm, there are still two examples that the character can interact with: Buzzbox 413 and Buzzbox 723.

During the Fourth War, the following four boxes are being fought over in the quest