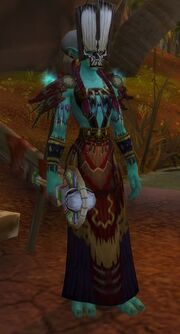 In the Valley of Spirits. 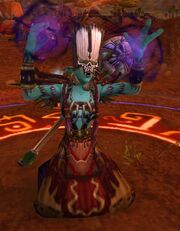 Bwemba is a jungle troll found in Stormwind Harbor in Stormwind City with Darkspear Warriors for the Alliance and in the Valley of Spirits in Orgrimmar for the Horde.

Bwemba follows as adventurers head to enlist the aid of Nesingwary's Expedition only to discover that the camp is being stalked by the panther Mauti. After Mauti kidnaps Grent Direhammer a chase ensues in which adventurers find and kill Mauti in her cave. Having a feeling that something wasn't right with the panther, Bwemba performs rituals over the body and discovers that it was sent by High Priestess Kilnara. Kilnara's spirit then asks them why they killed her cat before saying that Stranglethorn belongs to the Gurubashi and vanishing. After witnessing Grent's last request, she sends adventurers to the Rebel Camp (Alliance) or Grom'gol Base Camp (Horde).

Adventurers and Bwemba discover the camp is under attack by trolls under the command of Bloodlord Mandokir after successfully beating back the trolls. The flight master informs Bwemba that her contact has already headed out to the Explorers' League Digsite and the Hardwrench Hideaway, for the Alliance and Horde respectively. After arriving they discover that the town has become overrun by zombies. After returning the citizens to normal it is discovered that Zanzil the Outcast, who has rejoined the Gurubashi, was responsible for the chaos. Bwemba then instructs adventurers to head to Booty Bay where they meet the second Darkspear Emissary, Vol'jin, personally warning Baron Revilgaz about the Gurubashi.

Bwemba attended a dinner with the Horde leaders after the defeat of the Burning Legion.[1][2]

Bwemba can be found at the Darkspear Embassy in Dazar'alor. Though she had never been to Zandalar before, her grandfather used to tell her stories of it. The very wind is alive with power of the loa, and she can feel Pa'ku soaring somewhere in the skies.

Bwemba later assisted Master Gadrin in summoning the spirit of Vol'jin near his funeral pyre outside of Orgrimmar.[3]

The adventurer can fight her alternate-self in the Vision of Orgrimmar in the Valley of Spirits.

Are you here to aid da Darkspear, <class>?

I be an emissary from da Darkspear trolls. Da threat we face, also be a threat to da Alliance. You willin' to help out da Darkspear, <race>?

The very wind here be alive with da power of da loa. Pa'ku soars somewhere in dese skies. I can feel her presence.

I never be settin' foot on Zandalar before, but me old gran'fatha' used ta tell me stories of dis place.

Judging by her attire and the fact that she assisted Master Gadrin in summoning the Spirit of Vol'jin, she may be a witch doctor.